It’s never too late to plan a summer vacation when the nation’s longest interstate provides access to the country’s best trout waters. 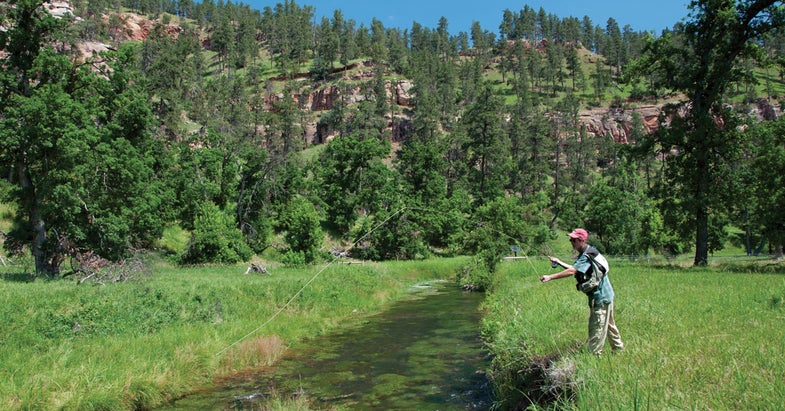 As you blast across the arid grasslands of central South Dakota on I-90, the prospect of encountering trout amid the shimmering heat waves might seem dim. Yet, paradoxically, I-90—spanning the country from Boston to Seattle—provides access to some of the nation’s best trout water.

I have driven the entire route. While there are fine trout streams along the Eastern segment (the Housatonic River in Connecticut and Massachusetts, for example), the Western two-thirds of the highway slices through my favorite American trout territory. Let’s go fishing.

Madison, Wisconsin, anchors the eastern edge of brook and brown trout paradise. A short drive out of town is Black Earth Creek, among the Dairy State’s most productive and challenging trout streams. Rolling toward the warm-water mecca of the Mississippi River, I-90 bisects a maze of trout streams feeding the La Crosse River. Breaching the Mississippi Valley’s bluffs in Minnesota, the highway soon leaps across beautiful Rush Creek; traveling anglers can admire its deep, verdant valley from a hilltop rest area, spotting dimpled rises far below. Downstream, trout-filled tributaries like Pine Creek snake through quiet coulees, with plenty of public access. Heading toward the setting sun, I-90 next arcs between the headwaters of the fertile Root and Whitewater watersheds, both inviting destinations.

A day’s drive and 550 miles farther west, the Black Hills rise from the Great Plains like a magical trout oasis. Boasting the highest elevation between the Rockies and the Alps (7,242-foot-high Harney Peak), the Hills capture sufficient moisture to generate more than 700 miles of trout streams. From Rapid City upstream into the Black Hills National Forest, Rapid Creek affords some of the region’s best trout fishing. Straddling the South Dakota–Wyoming border and flowing under I-90, Spearfish and Sand Creeks rank as two of the most productive limestone spring creeks in the U.S., with abundant public access and camping opportunities.

If there is an epicenter to I-90 trout country, this is it. While the sage-clad plains between Sundance and Buffalo, Wyoming, don’t suggest trout, the towering Bighorn Mountains to the west certainly do. Upstream from where I-90 crosses the Tongue River near Sheridan, this wonderful stream twists through canyons and alpine meadows, surrendering brookies, browns, rainbows, and cutthroats.

Across the Montana border, I-90 bridges the Bighorn River, one of the world’s finest tailwaters. For 116 miles between Billings and Livingston, the highway hugs the Yellowstone River (sometimes heralded as the “Yankee Stadium of trout fishing”), with plenty of public fishing access sites along the way. If that weren’t enough, alluring tributaries like the Boulder and Stillwater rivers issue their own siren’s call. West of Bozeman, I-90 crosses a trio of luminaries—the Gallatin, Madison, and Jefferson rivers—with the Missouri headwaters nearby. Across the Continental Divide, the route winds along the rejuvenated Clark Fork River, collecting famed trout feeders like the Blackfoot River and Rock Creek near Missoula. I-90’s journey through Idaho’s narrow panhandle is relatively short, but there are options here, too: The Coeur d’ Alene watershed, with the spectacular St. Joe River nearby, is a cutthroat trout haven.

Central Washington in the Columbia basin shelters some of the route’s oddest and most compelling angling destinations. Investigate the state’s Quincy Lakes Wildlife Unit west of Moses Lake for a taste of these diverse fisheries.

West of Ellensburg, I-90 parallels the Yakima River, a superb rainbow stream large enough to float a raft or drift boat. Cresting the Cascades, we’re on our last leg, dropping toward Puget Sound, Lake Washington, and Seattle, with myriad local trout and salmon fishing opportunities. It is as the ancient Greek philosopher Heraclitus observed, you’ll never step into precisely the same water twice.