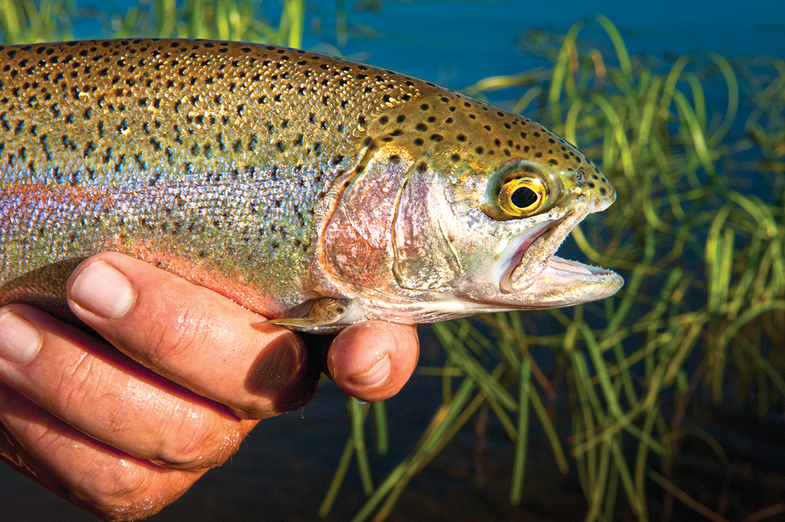 The stream I’m heading to is stocked, and I am a proud flyfisher of hatchery trout, aka stockies. I love to catch them—and I love to take them home.
Perhaps it’s a small act of rebellion against increasingly overwrought fishing. Fishing for hatchery trout is, quite simply, fun.

This kind of fishing harkens back to the days of pedaling to the local creek on a 10-speed with a rod draped across the handlebars. Still not convinced? Here are seven practical reasons why fly anglers should consider giving the lowly stockie a second look.

1. There’s more casting, less driving
Wild trout tend to thrive in unpeopled headwater streams or “destination” rivers—the kind that include five-hour drives, motel stays, or sleeping in the back of the truck. Hatchery fish, on the other hand, are stocked largely for convenience—the more popular and accessible the waterway, the more it gets stocked. This means suburban streams and municipal parks. One stream I used to fish was a five-minute walk from my back door. To grab a rod after work for a few casts before dinner was both liberating and good for the soul.

2. You’re a hunter-gatherer
Believe it or not, wicker creels—those things Martha Stewart likes to stuff with dried flowers and hang on the wall—were originally used to hold fish and keep them cool. Walking back to your truck with a full creel or stringer feels deeply satisfying. And for those who might turn up their nose at the thought of pellet-fed hatchery trout, two words: Smoke ’em. You don’t need to care about such things as ruining the resource—they exist for you to catch.

3. Any fly will do
You know those flies that come in little blister packs labeled “Ten Quality Trout Flies”? Or how about those rejects from the tying vise—like the puke-green Woolly Buggers you tied last year? Guess what? Hatchery trout pretty much hit anything that moves, so load up your fly box.

4. You’re a heretic
This is really naughty, but you can forget the fly rod altogether and go back to your roots, which for many of us means spinning gear or—gasp—bait. Tossing a shiny Mepps on an ultralight or feeling the rat-tat-tat as a fresh stocker gobbles up a worm might just bring you back to those carefree days when trout fishing was less about $800 rods and more about the humble pleasures of catching fish.

5. It’s opening day
It’s hip for serious fly anglers to scorn opening day of trout season as amateur day, when the great unwashed hordes descend onto stocked streams with Wal-Mart rods and PowerBait. All true. But it’s spring, for God’s sake, and the rivers are full of fish. Why not celebrate the opener? Grab your kids or a niece or nephew and hit the local stocked stream. You’ll see everything from guys with surf tackle to four-year-olds with Sponge Bob push-button rods. Lines will wind up in trees, dogs will bark, and people will fall in. Some fish will be caught. It’s one big goofy fish-themed party—be a part of it.

6. You believe In vigilante fishing
If you are a wild-trout purist, then you probably hate when the stocking truck pulls up to your favorite stream and dumps in a mess of rubber trout. And for good reason: Stockies are genetically inferior, can introduce disease, and often outcompete their wild brethren. So get the hatchery fish the hell out of there. Though it might be more efficient to petition your local fish and game folks to not stock a wild trout stream in the first place, why not have some fun in the meantime, not to mention a few meals?

7. It’s a gateway fish
The first trout I ever caught came from a stocked creek that runs bathtub warm by the summer. I had ridden my bike there with two of my friends and caught it on a worm. I shudder to think of where I would have wound up if, instead of that stocker, I had caught a carp or a chub—or maybe nothing at all. Maybe I’d be playing golf.

Stephen Sautner is the author of the upcoming book “Fish On Fish Off”; follow him at @FishOn_FishOff