Wherein the author steams up the Rio Negro to take on the world's meanest menagerie of freshwater fish. 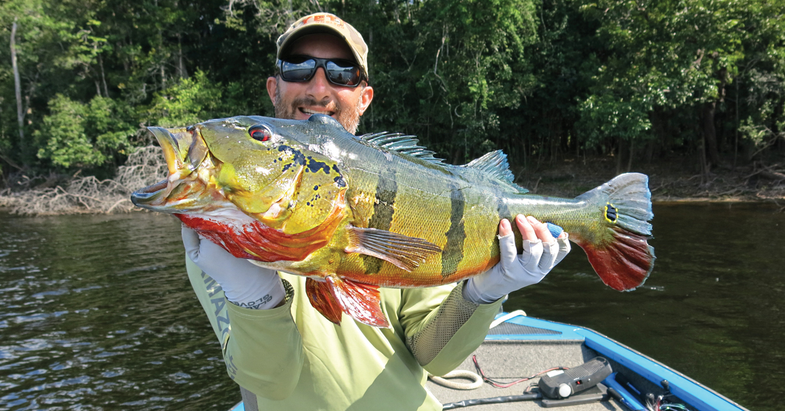 The jungle pressed hard against the banks of the river. Viewed from a distance, it was a wall of undifferentiated green with no breaks in the foliage. Up close, I could make out individual trees. They all rose to a uniform height as if kept in check by a divine hedge clipper. You rarely saw a tree that managed to outgrow the others by more than a foot or two as they fought each other for sunlight.

The trees had a band of discoloration about 25 or 30 feet up their trunks, indicating the river’s high-water mark during the rainy season. This was mind-boggling, given that at its current “low” levels, the river I was steaming up dwarfed the Mississippi many times over.

The Rio Negro is a tributary of the Amazon, joining with it at Manaus, a sprawling city of 1.8 million that draws indigenous people from the surrounding rain forest to its ramshackle apartments and dirty streets in search of work.

The jungle around it was the most unforgiving environment I’ve ever encountered. Any perceived vulnerability was pounced on without mercy.

After chugging more than 300 miles up the Rio Negro, and going past the small town of Barcellos, I witnessed this ferocity daily while I fished in hopes of landing a mega-size peacock bass.

I saw it the first day when a broad-winged raptor with bright-red bands on its tail swooped down onto my 6-inch topwater bait and tried to fly off with it clutched in its talons. Or when freshwater dolphins would lurk under our small bass boat and ambush the peacock bass we’d release over the side. Sometimes the dolphins wouldn’t wait that long and they’d chase the bass as they were reeled in. If they grabbed hold, a tug-of-war would ensue while I tried to tear the fish free by yanking on my heavy baitcasting rod and hoping the 85-pound braid held.

My lures were even attacked from land. Casting along the bank one day, I snagged a small log. As I jiggled the chopper to get it free, a large lizard sprinted out of the underbrush and jumped on the log to pounce. It took it half a second to realize the lure wasn’t a meal and it vanished as rapidly as it had appeared.

The fishing was ferocious. There wasn’t anything that grabbed onto the baits that didn’t fight like hell. Mid-size bass from 5 to 7 pounds had no trouble doubling my rod over and pulling off long lengths of line with every surge. The smaller bass came more readily to the boat, but even they had enough fight that you’d never consider lipping them for a trophy shot if you value the flesh on your thumb.

And then there were the big fish. Sometimes as they zeroed in on the baits, they would throw a wake like a surfacing submarine. Other times they would come up from below and the water would erupt like a geyser. In either case the guide would yell, “Set the hook! Set the hook!” in broken English while I hauled back on the rod.

My enthusiastic hooksets nearly cost me dearly. I was throwing a chopper along the bank, ripping down hard on the rod with every crank of the reel to make the metal propeller at the rear of the bait spin and throw water with the distinctive bee swarm zzzzz sound, when a huge fish boiled up from below and swallowed the 8-inch lure. I ripped back hard to set the hook and the rod shattered in three pieces, leaving me with a cork-­handled graphite stump.

The fish took off down the bank and stripped line from my reel as I looked helplessly at my broken gear. But the line and the hooks held. After a couple of minutes its surges no longer outdistanced the line I was able to recover, and I gained ground. Eventually, I got it alongside and we managed to guide it into the net and haul it aboard. The rod was a worthwhile sacrifice for a 20-pound peacock. Its maw was so large that my 8-inch lure had disappeared from sight.

I fished a total of seven days, the first two based off a giant yacht that served as a mothership to the string of bass boats it towed upriver, and the last five out of a lodge. These venues were as luxurious as the jungle was harsh, and they gave me a chance to recoup each night before heading back out to fish at dawn the next day. Both operations—known officially as the Angler’s Inn Amazon (the boat) and the Rio Negro Lodge by Angler’s Inn (the lodge)—are run by Billy Chapman Jr., a well-known figure in the international fishing scene. Chapman’s knack for hospitality and showmanship, coupled with his high-energy persona, created an aura of infectious optimism among the anglers in our group.

Chapman recruits his guides from the indigenous people who call the jungle home. Navigating the twisting maze of braided water and lagoons, which left me instantly disoriented, was second nature to them.

My guides put me not only on peacock bass, but on piranha, freshwater barracuda, and dogfish, which are primitive aquatic nightmares that hit topwaters with a degree of savagery exceptional even in these croc-infested waters.

The nastiest bite I encountered was one I didn’t become aware of until I arrived back home. Toward the end of the trip I got nailed by a virus. The pain in my skull and down my spine was so intense that the morphine drip in the ER couldn’t touch it, and I only got some relief after the docs put me on some superdope with a name I couldn’t pronounce.

I never found out what kind of virus it was, but I knew what it wasn’t. The Rio Negro is blessedly mosquito-free, so malaria, dengue, and their ilk weren’t an issue. And after two weeks of feeling like a bat had been taken to the back of my head, I rejoined the human race. The trip was definitely worth it, but for me, paradise came with a price.