Fishing for Monster Lake Trout and Pike in the Yukon

Angling adventure in an unforgiving land 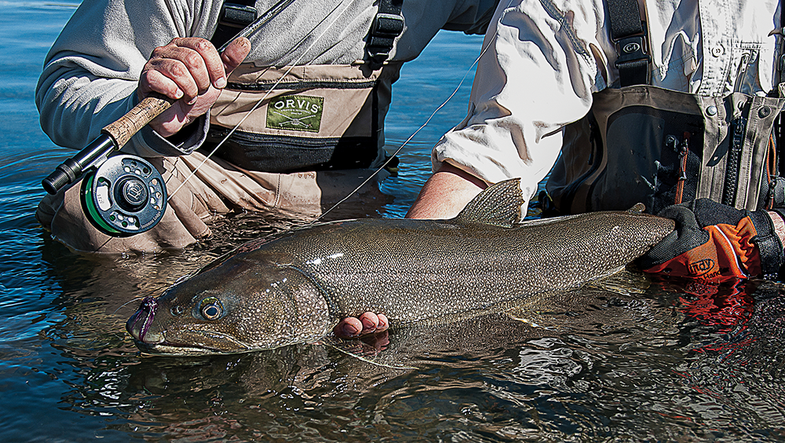 It’s around 4 p.m. on Tillei Lake in the southern Yukon, and DJ Tudino is reading the fish finder mounted to the stern of his 14-foot Lund fishing boat.

“There’s a steep underwater wall here that drops 40 feet,” says DJ, a 25-year-old guide with Inconnu Lodge, a top-notch fishing outfit that’s been putting guests on top of the biggest lake trout and northern pike in the Yukon Territory for longer than DJ’s been alive. It’s the reason I’ve crossed Canada from Toronto—a distance of nearly 3,000 miles—to spend five magnificent days in country that’s as rough and dangerous today as when American author Jack London visited during the Klondike Gold Rush of the 1890s—and lost his front teeth to scurvy.

Over the last couple of days, I’ve landed quite a number of nice fish, but so far not a trophy among them. However, I feel like my luck’s about to change, and this is just the kind of rocky feature we want to troll—the edge of an underwater reef whose contours mirror the ridges, spurs, and slopes of the mountains that hug the western shore of Tillei. It’s where the heavyweight lake trout in excess of 25 pounds, with enough attitude to rip the rod and reel out of an angler’s hand, like to hang out.

Tillei is perhaps the best lake in this corner of the Yukon—a region twice the size of Oregon, with more moose than people—for massive lake trout. But after working this underwater wall for 20 minutes, we don’t get as much as a bite. Then my silver Half Wave spoon is smacked in about 55 feet of water.

“Fish!” yells DJ. I pull up hard to set the hook and start reeling. This deep-water scrapper immediately tears out about 100 feet of line. I work him with every bit of skill and ingenuity I can muster, letting him run out as much line as he likes, then quickly reeling up to make sure there’s never any slack that would allow him to spit the hook.

When I finally get “Tommy Two Ton” port side of the Lund, it’s just to say hello. He runs hard a couple more times before we finally get him inside the boat. This bull elk of the deep is the color of gun metal, with green streaks and white spots all over his flanks. He measures nearly 4 feet in length and weighs 35 pounds. But what is most impressive about this slab is his girth—this bruiser has probably been swimming in Tillei for 40 years, and his majestic belly makes him nearly as wide as he is long.

This is the biggest fish I’ve ever caught. And that’s saying something, because over the years I’ve hooked into a number of king salmon weighing in excess of 30 pounds—truly big and impressive tyee trophy fish—on angling expeditions at some of the top lodges on British Columbia’s Pacific Coast.

Tommy Two Ton is too much fish for just one man to hold, so we forgo the traditional trophy photo in favor of video from a GoPro mounted to the aluminum boat’s gunwale. I kiss this lake monster on the back of his head before we release him into the blue-steel waters of Tillei. Indignantly he shoots back down to the icy depths like a killer harpoon released by a commercial swordfish fisherman.

Inconnu (inconnulodge.com) is an angler’s paradise, located deep in the Yukon wilderness about 90 minutes northeast of Whitehorse by float plane. It’s near the border with the Northwest Territories, and the crossing from the Pelly Mountains to reach McEvoy Lake offers stunning views of alpine peaks with grazing caribou and mountain goats.

Warren and Anita LaFave, who opened Inconnu Lodge 28 years ago, deliver warm northern hospitality and plenty of four-star luxuries, including heated guest cabins with giant down duvets and a chef who knocks it out of the park every night.

The fishing at Inconnu Lodge is crazy good because no one else has access to the ice-cold lakes, lagoons, bays, and streams in this part of the Yukon Territory. Also, Inconnu flies guests into a different spot each morning in its DeHavilland Beaver to keep fish off guard and offer different angling experiences.

Back onshore, I’m grateful to have snagged a lake trout that is the local equivalent of the Colossus of Rhodes. Now what I need to complete my trophy collection from this Yukon fishing safari is a huge northern pike.

My quest begins on my third day at Inconnu on the borders of a weed bed in about 8 feet of water on Fortin Lake. Spin-casting, I hooked into some impressive pike, including a 33-inch torpedo with rust-colored fins. But the trophy I had in the crosshairs of my mind is waiting for me on Incognito Lake, where a grizzly wrecked Warren LaFave’s cabin that winter.

There, on my last day, alongside a forest of cabbage weed, during a break in an intense storm, I hook into my second Yukon monster. When he swallows my Fire Tiger spoon, he bends my rod nearly in half. It’s my fourth pike of the day, but this one is the world-class heavyweight I’ve been dreaming about.

After a long scrap, I finally manage to maneuver the brute into DJ’s hands. He removes the barbless hook from the fish’s jaws without a scratch, though getting bitten and raked is an occupational hazard in this line of work. Especially if you work without a net, which Inconnu guides are not allowed to use because they damage the protective slime covering the fish’s epidermis.

“This was definitely a fair fight,” says DJ. “We like to give fish a sporting chance to get away to keep everyone on their toes.”

Holding up all 43 inches and 20-plus pounds of this northern gator for a trophy photo, I fumble my catch. In regaining a grip on the hard shell of his slippery pointed head, I gash a finger on the pike’s lower jaw.

It cost me a bit of blood and flesh, but I had bagged both my trophy laker and trophy pike, and I feel on top of the world. The Yukon lakes have been kind to me.