The Salt Water Sportsman National Seminar Series is back and coming to an auditorium near you this winter! 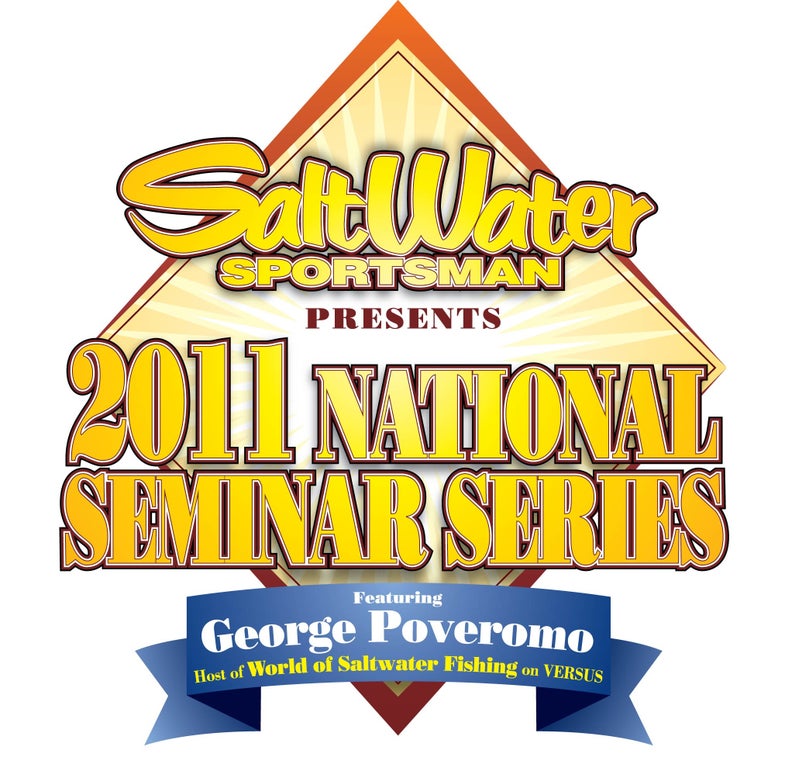 The Salt Water Sportsman National Seminar Series, which has been packing major auditoriums for more than two decades, is back and with one goal in mind–to make you a better angler.

“It’s without a doubt a great way to learn the short-cuts to fishing success, regardless of your level of experience,” says SWS Editor-At-Large and Seminar Series Host George Poveromo. “The amount of information revealed up on that stage borders on the unbelievable at times. There are no secrets withheld, and I’m constantly amazed at just how specific our faculty gets.”

Make no mistake about it. This is not your ordinary run-of-the-mill fishing clinic at a local tackle shop. As the nation’s premier educational seminar on salt water fishing tactics, the National Seminar Series is an elaborate production that’s held in some of the most prestigious and luxurious auditoriums in the country. With some of the very best authorities on saltwater fishing covering in explicit detail the how-to’s and where-to’s of locating and catching inshore, nearshore and offshore game fish within the respective seminar region, each session is supported by informative images, diagrams, video bytes and on-stage demonstrations; These specifically tailored visuals help reinforce the critical points being discussed on stage by our nationally- and regionally acclaimed teaching teams. Furthermore, image-magnification technology allows the audience to view detailed fishing charts, step-by-step rigging instructions, lures, baits, knots and much, much more on a pair of 10-by-10- foot screens, which flank the instructors on stage.

The series will once again be hosted by George Poveromo. George will be joined at each location by fellow SWS editors and nationally recognized fishing pros the likes of John Brownlee, Barry Gibson, Gary Caputi, Ric Burnley, Ted Lund, Spud Woodward, Mike Marsh, Dr. Mitchell Roffer, Harry Vernon III and Captains Trey Rhyne, John Oughton, Jimmy Price, and Bouncer Smith. In addition, these National Faculty members will be joined by teams composed of top regional anglers. A minimum of eight faculty members will be present at each location!

The seminars are held on Saturdays, beginning at 9:00 a.m. and concluding by 4:00 p.m. There is a one-hour break at noon. Long considered the best bargain in sportfishing, a Seminar Series ticket is only $ 55.00.  The ticket price covers six hours of instruction from the best pros in the business, a course textbook, a one-year subscription or extension to Salt Water Sportsman, one Roffer’s Ocean Fishing Forecast Analysis, 16-ounce bottle of OrPine Wash & Wax, one spool of Sufix fishing line, a $ 20.00 discount card off any purchase of $ 150.00 or more from Capt. Harry’s Fishing Supply, and chances to win valuable door prizes! The Grand Prize at each location is a Bahamas fishing trip for two to the prestigious Bimini Sands Resort & Marina. The Super Grand Prize, to be awarded two weeks after the conclusion of the 2011 series, is Mako’s new 18LTS Light Tackle Skiff!

As it enters into its 24th consecutive year of touring, the Salt Water Sportsman National Seminar Series continues to draw huge crowds. Why? The formula for success is really quite simple: Round up the top national and regional sport fishing authorities and have them divulge their most productive fishing tactics. The Seminar Series’ “no holds barred” format also requires these pros to reveal their prime fishing spots, the best times to fish them, and the best baits and lures to use. The 2011 Tour will be no different. For more information go to: nationalseminarseries.com. Here’s a rundown on the places, dates and topics to be covered.

WEST PALM BEACH, FLORIDA (February 12) – Beachfront fishing for tarpon and snook; River fishing for tarpon and snook; New inlet tactics that take bigger snook and tarpon; Catching snook on the flats; Live-chumming for snook; How and where to catch trophy snook; Speckled trout by the numbers; No nonsense monster trout tactics; Trout on topwater plugs; Taking redfish in the ICW; How to catch fish in the ICW and Lake Worth Lagoon; Light-tackle fishing for Spanish and king mackerel; Trolling and drifting for kingfish; Live-chumming for more and bigger kingfish; Tricks for catching trophy kingfish; Dialing in on South Florida blackfin tuna; Kite fishing for kingfish, sailfish, tuna and cobia; Cobia tricks; Small boat cobia tactics; Catching more and bigger grouper and snapper; Live-baiting for bottom fish; Deep- and Flutter- jigging for amberjack, grouper and kingfish; Chumming tactics for bottom fish; Reef and wreck fishing strategies; Targeting permit and African pompano in the inlets and on the wrecks; How to read and fish the local offshore waters (locating the true edges of the Gulf Stream, thermal breaks, warm water fingers and structure for wahoo, dolphin, tuna and billfish); The top trolling spreads and strategies for catching fish off the Southeast Florida coast; Top dolphin tactics; Offbeat tactics that catch more dolphin; How to target and catch yellowfin tuna off Grand Bahama Island; Scoring more wahoo locally and in the Bahamas; Secrets for catching more and bigger wahoo; How to read and follow the birds to score more tuna and dolphin; Swordfish like the pros!