Bio-Bullets and darts filled with an experimental drug are being used to sterilize deer. then there are the other options, such as splicing a sterilization agent onto a virus and setting it loose. an update on deer birth control. 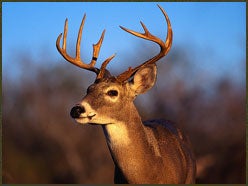 The experiment is bold and groundbreaking. Years have already been invested and budgets stretch well into six figures. Half a dozen scientists are taking part along with dozens of volunteers. But it’s all going to be worth it, says the Humane Society of the United States (HSUS), because in the end the research will prove to the world that it doesn’t take hunters to control deer populations.

The Humane Society is a national organization with a staff of 250 and a membership of about 7 million. Its literature describes lethal controls for deer as “irresponsible,” so the group’s agenda is clear. But can this wealthy nonprofit organization find a way to control deer without using hunters?

To achieve this goal, HSUS needs to prove it can control a wild, free-roaming deer population with immunocontraception (birth control). So its first step was to find a test area it could control. It settled on Fire Island, a 32-mile-long and half-mile-wide barrier island near the south shore of Long Island, New York. Fire Island has more than 200 deer per square mile
Now it needed to prove that its sterilization drug could handle the job.

The Miracle Drug
The Humane Society is using a drug called Porcine Zona Pellucida (PZP), a natural protein that allows boar sperm to attach to a sow’s ova. When injected into females of other mammal species, PZP elicits antibodies against that animal’s sperm-recognition protein, thereby stopping sperm from entering the egg.

The Humane Society got control of the drug when Dr. J.F. Kirkpatrick, a scientist at ZooMontana’s Science and Conservation Center in Billings, Mont. (the center is partially funded by HSUS), signed his Investigational New Animal Drug Document (INAD) for PZP over to HSUS. This document, which is issued by the Food and Drug Administration (FDA), is important, because without it, no person or organization can use the drug