Two recipients were honored by Outdoor Life at the SHOT Show. 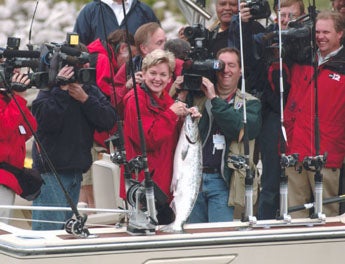 The Outdoor Life Conservation Award was established by Outdoor Life magazine in 1923. It is given annually to a person in the private sector and another in the public sector based on individual projects as well as a lifetime dedicated to sportsmen’s causes. Past winners have included such notables as Aldo Leopold, Jimmy Carter, John N. Cole, Congressman John Tanner and Oregon Governor John Kitzhaber. If you missed the winners in the February 2006 issue, we’ve posted them here. Editor Todd Smith will also be mentioning them during his speech at a SHOT Show breakfast.

With the help of the Nature Conservancy, Gov. Granholm secured more than 271,000 acres for protection on the Upper Peninsula through a working forest easement. The territory includes thousands of acres along the Two-Hearted River, made famous by Hemingway’s short story, as well as prime whitetail country and hundreds of miles of excellent trout streams, including the Fox and the Driggs. A major provision of the deal is permanent access for hunters and fishermen. The parcel also links nearly 2.5 million acres of federal and state protected land.

You’d be hard-pressed to find a deer hunter today who doesn’t know about the principles of quality deer management. Hamilton’s organization has revolutionized how landowners and hunters care for all the game on their land, not just whitetails.

Since the association’s founding in 1988, Hamilton has been a tireless lecturer, teaching the next generation of outdoorsmen through what he calls the “Aldo Leupold tradition”-that is, helping hunters understand the need for and encouraging them to take part in stewardship of the land. Hamilton has also served as a state project manager with Ducks Unlimited, a wildlife biologist for the South Carolina DNR and a project director for the Nature Conservancy.