The redesigned Ram has room for four (and all of their gear.) 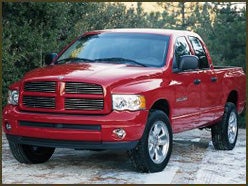 How do you update a pickup that’s as ground-breaking and popular as the Dodge Ram? Apparently the careful and conservative “don’t mess with success” approach some truck-makers take didn’t appeal to the Dodge boys. Instead, they made significant changes that go far beyond the contemporary rework of the Ram’s trademark grille and sheet metal.

Take the new Quad Cab, for example, which features four independent, front-hinged, full-size doors. Anyone who has tried to squeeze into the back of an extended-cab truck while wearing bulky hunting gear or waders will appreciate those big rear doors. How did Dodge find extra cabin room without enlarging the truck overall? By squeezing the box down from six-foot-six to six-foot-three. That still leaves plenty of space for dog boxes and all your camping gear. If you haul longer cargo, like a motorcycle or an ATV, an eight-foot bed is also available.

Of the three engine options, sportsmen will be most interested in the two V-8s. We tested the 4.7-liter, 235-horsepower motor new to the Dodge line, but for real grunt, stick with the tried-and-true 5.9-liter, 245-hp V-8.

The new Ram’s towing capacity remains 7,150 pounds for a 4.7-equipped Quad Cab 4WD (8,100 pounds with the 5.9), unless you opt for the stylish 20-inch wheels that came on our test truck. The lower profile on these fancy tires can’t support as much weight, so towing capacity dropped by 1,000 pounds. (Be careful how you order your options.)

The most radical change to the new Ram was the replacement of the solid-axle front suspension with an independent system. While die-hard four-wheelers are complaining about the switch (solid axles are generally more robust and easier to modify), we found the setup works just fine in most off-road situations. Plus, the new suspension, teamed with new rack-and-pinion steering, gives the massive pickup almost car-like road-handling characteristics. However, the full-sized Ram is best suited to open highways and wide-graded roads. If the trail to your favorite tree stand or fishing hole is narrow and full of switchbacks), be prepared to do a lot of backing and cutting around turns.

Still, the Ram isn’t meant to be as nimble as a CJ-5. It’s a full-size truck for full-size work. With the right motor and tires, you’ll get the job done in comfort and 21st-century style.