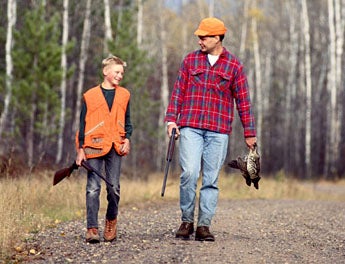 Young Guns
Q: I have five boys, ages 11, 9, 7, 5 and 3. I want to purchase a shotgun for them to use as they grow up. I have a 12-gauge and would like to get the same for the boys. Can you tell me what to look for in a youth-model gun? I imagine things such as weight are important. This will be mostly for trap shooting. _

_ A: A With five sons, it appears you’re raising your own trap-shooting squad. You don’t mention your financial means, but I’m going to assume that you’d like to get all of your boys into shooting with minimal financial stress.

Having said that, the bad news is that you’re going to have trouble trying to get along with fewer than three shotguns. The problem isn’t just having shotguns with reduced stock lengths to fit shorter arms, but being able to change the length of pull as the boys grow. There are a number of ways to do this; one is simply to start out with a youth-dimension shotgun and add spacers between the stock and buttplate to increase the length of pull as the boys grow.

A quick way to increase length of pull is to put on a slip-on recoil boot. Also, there are commercial buttplate assemblies that let you change the length of pull, but none that I’m aware of would give the extreme adjustment for the requirements of, say, 7- and 16-year-old shooters.

Fish Diploma
Q: I recently caught a cobia that weighed just under the minimum weight for my state’s citation program. I was wondering what citations are and whether they serve a purpose for the fishing community. _

**A: **Many states have citation, master angler or other award programs in place for key fish species in their waters. Like most records, their primary purpose is to act as a kind of achievement benchmark, giving competitive anglers a target to shoot for. For state fishery departments, citation programs let them court tourism by tooting their horns about the quality of their sport-fishing. Also, information about large fish and where and when they were caught is interesting data for fish managers, field biologists and yours truly, so I can give a local fishing hole a proper workout during the best time. _

Range Finder
**Q ** I shot a deer with my bow at 60 yards. One of my hunting buddies said I shouldn’t attempt shots at that distance, that there was a good chance I would only injure the deer. Is he right? How far is too far when you’re bowhunting big game? _

A This is a hotly debated question. In reality, a safe distance is determined by the individual archer’s skill level. Out West, it’s not uncommon for bowhunters to harvest animals at distances past 100 yards. Mention these distances to Southern bowhunters and they’re liable to expel you from their hunt camp. I recommend that archers only attempt shots they can routinely execute on the practice range. If you practice at 35 yards and are consistent, your effective range is 35 yards. If you’re accurate on the range past 50 yards, then it’s a safe bet you can drop an animal at long distances. Keep in mind that Olympic archers compete with recurve bows shooting fingers at 90 meters (that’s 98 yards). You simply can’t put a yardage limit on shots; it’s all about your competence level.