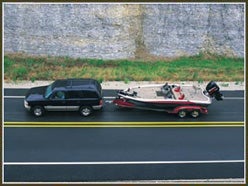 I once splurged on a pair of expensive leather-trimmed wool bird-hunting pants to accompany a new shotgun. Although the shotgun suited me, I never took the pants to the field. They just looked too smart for my kind of hunting. I felt the same way when I first encountered Land Rover’s new sport utility, the Discovery. In this case, however, though the smart-looking 4×4 positively reeks of self-indulgent luxury, it is as functional as the briar-scarred field pants I wear today. In effect, the Discovery is that rarity-a country gentleman who doesn’t mind doing dirty work. This is because the design staff has married a tough, fully capable four-wheel-drive undercarriage to a comfortable and luxurious cabin-and done so for a base price under $30,000.

For several years the company offered either the elegant Range Rover (at more than $50,000) or limited edition open-air 4x4s designed to recall the glory days of the African safari. This left a wide-open hole in Land Rover’s product line, which called for a sport utility that would appeal to a somewhat broader buyer base. When the Discovery debuted last year, it not only plugged the gap, but broke new ground as well, becoming the first 4×4 to offer standard dual front airbags. Other standard features include four-channel four-wheel anti-lock brakes, dual-temperature-control air-conditioning, an aluminum V8 engine, and a full-time four-wheel-drive system. The success of Discovery’s first year seems to confirm the company’s decision to offer a luxury 4×4 at an “affordable” price for sportsmen who yearn for the British Touch.

Although the Discovery touts new technology, it rests firmly on a bottled-in-bond offroad concept: full-floating solid axles front and rear. Nowadays most sport utilities use independent front suspensions for improved onroad performance. Hardcore offroaders, however, have always preferred solid axles. Why? Well, in a full-floating design, if the axle shaft breaks, the hub can still support the wheel and tires. Even if you can’t get power to the wheels, you can still tow the beast home. More important, solid axles help keep underbody components from dipping into trail obstacles as the vehicle twists and turns through rough terrain.

The downside of solid axles is that when paired with leaf springs (common practice in the past), the onroad ride is a bone-jarring torture test. To counter the rough ride on pavement, Land Rover engineers put coil springs at all four corners to smooth out the highway ride without compromising offroad capability.

The Discovery boasts 8.1 inches of ground clearance, plenty good for the type of offroad situations that most hunters and fishermen encounter. In addition, the suspension components work together to produce 19 inches of wheel travel-a real asset when you face a boulder-studded trail or a washed-out tote road. The short wheelbase (for a four-door model) of 100 inches also helps offroad performance.

To get through the muck, the Discovery relies on a full-time four-wheel-drive system. A two-speed transfer case with a floor-mounted shift lever lets you easily shift into and out of high-range and low-range 4WD, and a manual locking center differential helps out in slippery conditions by routing equal power to both axles to minimize wheelspin and provide better traction.

Power is courtesy of Land Rover’s longstanding 3.9-liter V8, an engine of distinctly American heritage. (The engine powered Buicks in the 1960s before being sold by General Motors to Land Rover’s then parent company British Leyland.) Today’s all-aluminum version generates 182 horsepower and 232 pounds-feet of torquue. The former is not exactly a clipper-class stat; as a result, the Land Rover can take its time coming up to speed on the highway. However, the torque rating is more than adequate and helps explain the Discovery’s commendable 7,700-pound tow rating. (A factory-installed Class III receiver is standard equipment.) The standard five-speed manual transmission can help improve acceleration, though most buyers prefer the optional smooth-shifting four-speed automatic. Because the Discovery sits on 16-inch wheels and large 235/70R16 radial tires, the bottom of the driver’s bucket seat is 3 feet above the road. As a result, the driver has a commanding view. So does everyone else, for that matter; the Discovery utilizes a raised rear roof with plenty of glass (twelve separate panels) to give every passenger a sense of space. Rear seat passengers will be especially delighted: the raised roof allows the 60/40 folding rear seats to be placed higher than the front seats so those in the back can peer over the heads of those in front.

Normally set up to handle five passengers, the Discovery can seat as many as seven when equipped with the optional fold-down rear jump seats. Bear in mind, however, that these seats take up valuable cargo space-even when folded up. And that raises an important issue. As well thought out as the interior is, cargo storage capacity is not one of the vehicle’s strong suits. The large glove box, console, and map pockets in the doors are all good touches, but outdoorsmen accustomed to packing a load of outsized gear will be hard-pressed to get all of it aboard. A contributing factor here is the short wheelbase, which limits the overall length. In this case, Land Rover made a classic engineering compromise, opting for superior offroad performance over storage space.

The Discovery comes with a high degree of standard equipment, and can be further upgraded with such options as dual electric glass sunroofs, rear air-conditioning, leather seats, and a hydraulic retractable rear step. This last item is a real help if you need to reach the raised rear roof. The 1995 Discovery also displays a new commitment by Land Rover to build quality. In the past, one of the unfortunate hallmarks of the British Touch-at least in automobiles-has been unrivaled luxury coupled with some legendary lapses in workmanship. (Nothing like having the knobs fall off that expensive radio.) But during my test, everything stayed in place-except for a mudflap lost while backing over a series of slippery mud-covered rocks. I spent the better part of a week trout fishing out of the Discovery, trying to figure out its special appeal. Does the world really need yet another “luxury” sport utility? The answer came one evening as I nestled in the comfortable leather driver’s seat while waiting for the sulfur hatch to come off. Just as the rings of rising trout began to pock the surface of the pool I had been studying, I was overtaken by a feeling of casual country luxury that is the essence of the British Touch. And yet, this 4×4 can get down and dirty with the best of them, as I learned when I threaded the Discovery down the twisted, washed-out access road that lead to the river. You don’t have to own a Purdey or a Hardy to enjoy the Discovery; all you need is an ability to enjoy the offer of a good ride.