How to determine what you need for your vehicle. 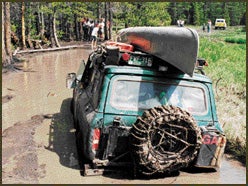 Thanks to a continuing boom in light-truck sales, your local tire store probably has a bewildering array of truck and SUV tires for sale. How do you choose a set that’s right for your rig? Determining what kind of terrain your truck sees most often is key, but there are several other elements to keep in mind when tire shopping.

All-Terrain Advantage
All-terrain tires are a good choice for trucks that spend a lot of time on dirt roads or in the sand, or for those that see an even mix of dirt and pavement driving. An all-terrain tread pattern still presents a lot of rubber to road surface, but the tread blocks are aggressively cut into the tire, which gives the footprint lots of biting edges. The blocks aren’t as big as those found on mud tires, so they will float over (rather than dig into) loose or sandy surfaces.

Because all-terrains are so popular, makers have developed a wide range of tread types that fall into this broad category. Yokohama’s new Geolander A/T+, for example, combines aggressively cut tread blocks on its shoulders with a center tread rib similar to that on a highway tire to put more rubber to the road. Goodyear’s Wrangler GS-A has an asymmetrical tread pattern that changes across the tread’s face from street-tire grooves on the outside shoulder to lug-like blocks on the inside shoulder.

If you’re on the road most of the time, buy a highway-oriented tire with lots of rubber to meet the road and relatively thin grooves and voids. These tires provide maximum traction on the pavement and run quietly on the highway.

Max Mudders
For top traction on mud, loose dirt and rocks, and for trucks that see few pavement miles, the best tire is one with big, knobby tread blocks that dig into the ground. Wide grooves and channels allow these tires to self-clean as they spin so the biting edges don’t get caked with mud and lose their grip.

The big tread blocks make them bad road tires, however. Those blocks squirm on the pavement, giving them mushy road contact and generating a tire’s number-one enemy-heat buildup. The mudder’s big voids also mean there’s less rubber in contact with the road, so there’s less grip, plus mudders on pavement are very noisy.

For Those Who Tow
If you tow or haul heavy loads, pay particular attention to the tire’s load rating. All tires have their load capacity ratings printed on the sidewall. If your truck is doing serious hauling duty, you should look into tires designated for light trucks (denoted with an “LT” in the size listed on the sidewall) rather than for passenger cars (P-metrics). An LT tire typically has stronger body cords, thicker plies in the carcass and belts that are more heavy duty than those on a passenger-car tire, giving the LT a higher load capacity, even if you’re comparing tires of equal size.

Is Bigger Better?
Bigger tires do have benefits: a larger footprint for increased traction, taller sidewalls for better ground clearance and a meatier appearance under the wheel wells. However, a taller tire changes your axle’s final drive ratio, so acceleration will be negatively affected. That bigger footprint increases rolling resistance, which reduces fuel economy, as does the bigger tire’s heavier weight. If the tire is too big, it will rub against fenders or frame rails, potentially damaging the tire and the sheet metal.

If you must have larger tires, be prepared to make other modifications-a suspension lift, spring and shock upgrades, fender flares, possibly a ring-and-pinion change-to accommodate the bigger meats.