The best sportsmen's gear innovations of 2004. 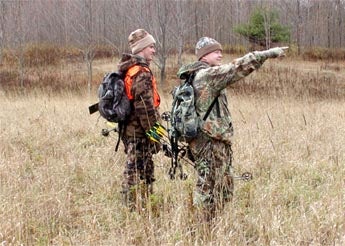 With a surprise introduction that undoubtedly has engineers at other optics companies scrambling, Leica invented a binocular/range finder that looks, well, like a binocular. Not that engineers at other optics companies have been idle. This year Swarovski leaped into the range finder business with a high-quality 8×30 monocular/ range finder. And Nikon developed a range finder packed with electronic brains that weighs only 7.4 ounces. In other news, Coleman introduced a portable water heater that warms water to 160 degrees in seconds; Suunto somehow managed to stuff a GPS, compass and altimeter into a wristwatch; Orvis debuted a line of clothing that repels insects; Buck came out with a solid deer knife that weighs 4 ounces; and Gerber has so many smart new gadgets we wonder if its R&D people are on commission. We could go on, but instead we’ll let you.

Wristwatch GPS
Unfortunately, I didn’t have a working unit of this new wrist-top computer to toy with, but I still had to tell you about it. The Suunto X9 is a GPS, an electronic compass, a barometer, a thermometer and an altimeter-all in a wristwatch. At press time, the GPS software wasn’t available, but the rest of the features were, and each performed as advertised. Though the owner’s manual begins with a disclaimer-“Do not use the Suunto X9 as [BRACKET “your”] only navigational aid”-the item’s potential is enormous. Routes and place names can be stored in the X9, which not only shows the distance to your destination but also estimates your time of arrival based on your speed. The X9 has a weather alarm that sounds when there is a change in barometric pressure, and the unit comes with a charger and a “docking station,” so it can be connected to a PC._ ($725; 800-543-9124; www. suuntosports.com)_

Comfortable Climber
As I carried Ameristep’s all-aluminum Non-Typical Climber into the woods, I discovered it has its own acoustics system-it plays a full range of metallic bangs, clangs and twangs. When I reached the tree, I didn’t like that its climbing cables lock down with bolts, washers and nuts-too many small parts to worry about. My impression changed, however, when I started climbing. The stand hugged the tree like it knew my life depended on it. Once I was seated, I realized I’d never been in a climber this comfortable before. The stand, which weighs about 19 pounds, can be adjusted into various positions to fit different styles of hunting. When stealth is needed, leave this stand at home, but when all-day comfort is called for, this stand is a good choice. ($319; 810-686-4035; www.ameristep.com)

Binoculars That Know Yardages
Leica’s 8×42 BRF and 10×42 BRF Geovids look and feel like binoculars and weigh about the same, but they are also easy-to-use range finders. When you look through the Geovid’s crystal-clear optics, you can press its measuring button to activate the unit’s otherwise-invisible LED display to take range readings of anywhere from 10 yards to approximately 1,300 yards. An important characteristic of the Geovid’s display is that, besides vanishing completely when not needed, it automatically adjusts for brightness to compensate for changing light levels. Unlike the original Geovid 7×42 DBA introduced in 1994-which amazed users with its optical quality and range-finding capabilities but repelled them with its 53-ounce weight-the new Geovids measure 6.9 by 4.7 by 2.6 inches and weigh only 32 ounces, making them virtually indistinguishable from standard 42mm binoculars. Its remarkably conventional size and appearance was achieved by incorporating the laser-emitting system as an integral part of the binocular’s central-hinge assembly. (From $1,800; 800-631-1584; www.leica-camera.com) _

Bill McRae [pagebreak] Four-Ounce Deer Knife
Buck Knives’ CrossLock has evolved into the Alpha CrossLock PBS, a knife with a pair of 3-inch blades: a spear-point knife blade and a guthook/saw. An aluminum frame keeps its weight down to 4 ounces. It opens smoothly with one hand and locks solidly. _($90 in camo; 800-326-2825; www.buckknives.com)

No More Tent Poles
Sometimes an innovation is simply the combining of two common items. That’s the case with Kamp-Rite’s new Tent Cot, a combination tent and cot that’s a full 7 feet long when open but folds down to 30 by 35 by 6 inches. In our field test it set up easily and was as comfortable as a folding lounge chair. At 18 pounds, it might be a bit heavy to pack in long distance, but sleeping in one would sure beat lying alongside a few sportsmen I know. Winchester Tents offers a camouflage version (shown above) through a licensing arrangement, so you can camp covertly. (Kamp-Rite, Inc.: $119.95; 800-709-9905; www.tentcot.com. Winchester Tents: $159; 888-700-8368; www.winchestertents.com)

Insect- Repelling Fabric
Buzz Off fishing clothing from Orvis has insect repellent embedded in its fabric. I wore the shirt shown above while bass fishing in Florida to see if it would help keep mosquitoes at bay. I left with nary a bite…from the insects, that is. ($69; 888-235-9763; www.orvis.com)