Here's how to get started. 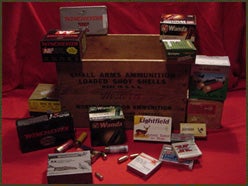 For those sportsmen who want to start collecting something, ammunition is a great place to start. It’s relatively inexpensive, the boxes look great and there is a readily available source–sometimes no farther than the old boxes of ammo that may have been passed down to you from your father or granddad.

When looking at cartridges, the three most important things to remember are condition, graphics and rarity. The categories are many and varied. Military ammunition from all the wars is very collectible, especially if it’s in full boxes such as those pictured here. A good place to start is to collect all the arsenals that produced a particular cartridge. One word of caution: Stick to rifle and pistol ammo. Many of the 35mm and other rounds were explosive. Age does not defuse these rounds and attempting to pull the bullet could lead to loss of life or limb.

Hunting ammo boxes–both single boxes and wooden crates -are very collectible. The single boxes often had great graphics depicting hunting scenes-rabbits, geese, ducks and squirrels. Many were in color and look great displayed in the hunter’s den or office. The old wooden ammo crates also have nice graphics and many early crates were of finger-joint construction. The thing to look for in boxes and crates is uncommon gauges such as two-inch .410 rounds, 25-count boxes of rifled slugs or buckshot in the smaller gauges. Crates labeled paper shells, brass cases, Super Speed, Kleanbore and gallery loads (back when every carnival had a shooting gallery) will all command a premium.

Odd-count boxes such as a 40-round box of .22 Long Rifle by Winchester Western are also desirable. Vintage ammo for the big-bore Sharps rifles in some of the odd calibers is a sure winner. Ammo for double rifles that were carried on safari in calibers like the .470, .577 and .600 Nitro Express, were high dollar then and they’re worth even more now (many are $50 to $100 a round).

Pin-fire cartridges are scarce and a full box can be worth more than the gun that fired them. These cartridges were very fragile and not very dependable. Most pin-fire revolvers were made in France and Belgium. Though an improvement on cap-and-ball revolvers, they were not well received in America. Chris C. Curtis’s book titled_ The Pinfire System_ will be very helpful in cataloging and identifying these cartridges. Cartridges of the World (Krause Publications) is also a helpful historical reference.

Cartridge boards, those large displays made by the ammunition companies for their dealers to display in their shops, are highly collectible. Most featured all the different cartridges that were produced by a given company with the company’s logo (and many times great looking artwork) displayed at the top. A Winchester cartridge board from the late 1800’s and early 1900’s will sell for thousands of dollars depending on its condition.

Cartridge collecting is fascinating and you can start right now by going to a gun show, auction or antique mall. The last gun show I attended, I found a full box of Trounds (ill-fated triangle-shaped pistol cartridges). Military ammo from all over the world is readily available as is collectible sporting ammo. And it’s reasonably priced. All you have to do is a little looking.