If you're looking to get into collecting outdoor items, hunting and fishing licenses are a great place to start. 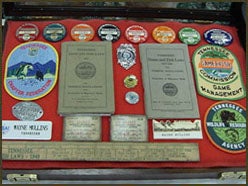 Most early licenses were issued as buttons or badges and some are quite pricey. The goal is not how many you can find, but to collect a complete set, which can be a real challenge. The other key aspect to remember when collecting is **condition, condition and condition. **A rust spot or slight discoloration can turn a $200 button into a $20 button.

The buttons most favored by collectors tend to come from the Southern states. The reason for this is that many of the hunters and fishermen in the South were out to put food on the table, not to find trophy racks. They were farmers or tenants and most Southern states required hunters to have a license.

I was at a National Fishing Lure Collectors Club show in Pigeon Forge Tennessee, where I had the opportunity to photograph the collection of D.Wayne Mullins who has the complete set of Tennessee buttons. All are in pristine condition.

The set in the photograph above depicts a Tennessee button set from 1933-1941. The 1941 button was the last button-type license issued in the state due to the metal shortage in WWII. Buttons were not reissued after the war due to production costs. A set such as this would sell for $2,000 or more if you could find someone willing to part with a very special piece of Americana.

Not all licenses were issued in button form. Some were framed certificates with the state and year on the frame and the actual license information inside. States that used these types of licenses included Arkansas, Ohio and California. Pennsylvania used a button-type license but later went to a square metal plate, which was displayed on the sportsman’s back.

The way to find these highly collectible badges and buttons is not different than hunting for any collectible item-yard sales, auctions and antique stores are all good places to start. Gun and tackle shows are also great places to find these items and to learn from other collectors and dealers. Good hunting, and remember there are more treasures out there waiting to be found. I’ll tell you in a future column about the lure that was bought at a church rummage sale for .50 cents that eventually sold for five figures.