Keep peace with other hunters this season by using your ATV responsibly. 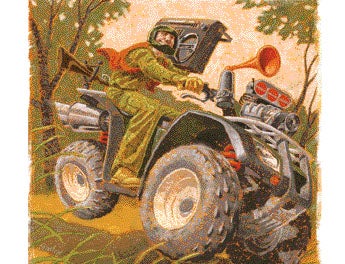 The first time I heard the term “squid,” it was applied to a young ATV rider who decided it would be fun to spin doughnuts in a trailhead parking lot, spraying gravel and raising a cloud of dust as other riders were unloading. “What a squid,” muttered a veteran rider observing the scene. Adopted from California surf jargon, the squid label is generally applied to someone who’s oblivious to his own rude behavior, though not really malicious.

Squidly behavior is always aggravating, but never more so than during hunting season. The guy who takes an early morning “scouting” ride under your opening-day tree stand, for example, could waste all your preseason preparation and your vacation days, leave your freezer empty and your trophy wall bare. I know hunters who have just walked out of the woods and gone home after they decided an ATV rider had spoiled their day. Unfortunately, this reinforces the notion held by the horse-and-hike crowd that an ATV doesn’t even belong in camp, and tars all ATV riders with the squid brush.

So, here’s how to make sure you don’t become this year’s camp calamari.

Park and Hike: An ATV is a handy tool for moving into and out of camp, for hauling out downed game or for emergency back-country transportation, but keep your riding activities to a minimum during hours when game is likely moving and hunters are working hard in the field. Stick to riding on main roads or trails, then park your ATV and walk into your stand or scouting position.

Set Up a Quiet Zone: Whenever possible, try to locate camps and areas where other hunters or parties are likely to be on stands or driving and then steer clear of them. The point is to avoid riding where you may disturb others, or worse, spook the game where they’re hunting.

Tread Lightly: Preserve your riding privilege on public lands by observing the basic Tread Lightly! concepts. Never ride off a marked trail, even to retrieve game. Instead, carry your kill to the trail and your parked ATV. When hunting on private land, check with the landowner before riding off trails or roads. Tear up his wetland, for example, and you and other hunters might be excluded next season.

**Ride Safe: **Accidents happen, but an injury caused by careless riding could not only end your hunt, but also disrupt your partners’ hunt if they have to take time to evacuate your broken body.

Pack Smart: Always transport firearms or bows in a protective scabbard mounted on the ATV. A large load, gear or animal carcass could raise the center of gravity of an ATV and affect how it handles. Take it easy and slow down. Make two trips if the load is too large.

**Don’t Forget Maintenance: **You can cover a lot of country on an ATV, but that also means it could be a long walk back if your ride breaks down. Make sure your ATV is in top condition, pack along a tire repair kit and basic tools, and know your fuel range so your buddies won’t have to tow you in. They came to hunt, remember?

The Prowler has great off-road capability, with independent front and rear suspension. It features 10 inches of travel at each wheel, 12.5 inches of ground clearance and 26-inch Goodyear tires. Selecting four-wheel drive and locking the front differential is a push-button operation. A 641cc, single-cylinder engine is located in the center of the chassis. Offered with red, dark green or lime green bodywork. (Base price $9,499; 218-681-4999; arcticcat.com)