The Da Vinci of Hunting Packs

Marty Grabijas the owner of Mother Tech, a revolutionary hunting pack company, sits down with Outdoor Life at the SHOT Show to answer some questions. 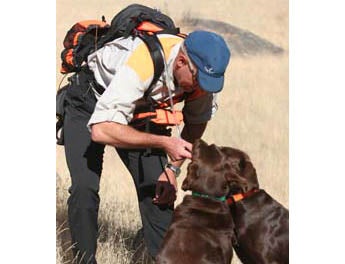 Marty Grabijas is revolutionizing hunting packs at Mother Tech by throwing out everything we used to know about design, and starting over from the first stitch. I caught up with him prior to SHOT Show where he plans to debut a new turkey vest. His designs are based on traditional backpacking gear, which is built for comfort while hiking long distances.

OL: How did you come up with the Mother Tech line of packs?

MG: I was going on a lot of backpacking trips in the Pacific Northwest, and started to compare what hiking companies were selling to what was available on the hunting market. The difference was laughable. Backpacking gear is built with fluidity of motion in mind, whereas hunting vests still used an old design that put weight on the wearer’s shoulders. So, the first idea with Mother was to construct a pack that fit correctly to the body.

MG: Jesse Thompson from Industrial Alchemy took a concept I had for a day pack and made it happen. The first problem was fabric selection. Much of what is available for hunters uses cotton, but that’s the wrong fabric for the mountains or rainy weather. It’s important to use a stronger synthetic, which is what was incorporated into the day pack. Plus, the load is carried on the hips instead of the shoulders. By switching the point of the most weight, it lessens the burden on the back. In chukar country, where I do most of my hunting, that makes a huge difference.

OL: Were you nervous about entering such a niche market?

MG: A little, but I knew that I had something different. Once I had a good prototype, I sent out the pack to some media contacts and buyers. Everyone loved it. Now, we’ve expanded and started work on the turkey pack.

**MG: **I have the most experience with the subject matter. Mother is not about making “me-too” products, so it’s important to tackle a subject where I feel comfortable conceiving a design from the beginning.

MG: Probably the coolest feature is the slip seat, which slides into the pack’s back pocket by pulling on a string. This way you won’t have to walk into the woods with a piece of foam slapping your rear or spend time digging a seat out of pocket. The concept will be expanded into a full line of still-hunting packs for 2007.