How to make trail cams work for you. 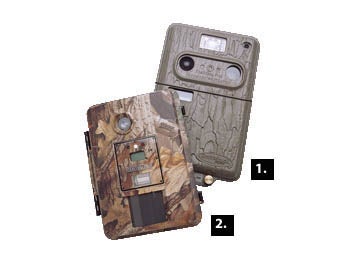 Look Ahead
Before the season, use cameras to watch antler development and learn what bucks are out there, but don’t rely on deer to follow their summer patterns come fall.

Set With Care
Position cameras just close enough to trails, scrapes and rubs to get a glimpse of a passing buck without spooking him. Don’t try for in-your-face, magazine-cover shots. Set cameras higher at the edges of fields and food plots for a more panoramic view. Bucks often use different trails than does, and a camera can reveal this.

Minimize Human Traffic
The more you go out in the woods to check your cameras, the more human scent you leave and the more you risk alarming a buck. One advantage of a digital camera is that you can go into the woods, check your camera and hunt right then and there (rather than take your film to be developed, come back later and possibly spook him…if he’s still around).

Act Now
Digital cameras provide immediate information as deer shift from summer to fall food sources and bucks begin to range more during the rut. “Scout today where you will hunt tomorrow. If you photographed a big buck last night, you can hang a portable stand and hunt him today before he moves on,” says camera designer Mark Cuddeback.

Take Inventory
After the season, cameras will show which bucks have survived so you can plan to hunt them next year. Wisconsin hunters Ken Kaszuba and Brett Gorzalski photographed 12 bucks in an 80-acre suburban woodlot after last season, including some they’d never seen before.

Invest Wisely
Digital cams cost more up front, but less in the long run if used frequently because there’s no film expense. On the other hand, you can buy several film cameras for the price of a high-end digital and scout a larger area.

**1. Non-Typical Cuddeback Digital Scouting Camera **
This first-rate unit features a high-res digital camera and an f2.8 lens, which allows a greater depth of field and excellent low-light performance. It records photos and video clips on a compact flash card for viewing with camera, camcorder, TV or PC. It also features an electronic theft-deterrent system, a cable lock and an optional bear- proof security box. ($399; cudde backdigital.com)