A new GPS unit from Garmin and a fashionable deer knife 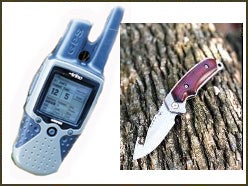 In Sync
Rumor has it that Army Rangers have used Garmin’s new Rino (a two-way radio/GPS unit) to orchestrate attacks on Al Qaeda positions. With that in mind, picture this scene:

A group of deer hunters are ready to perform a deer drive through a swampy bottom. Each has a Rino on his belt and the unit’s headset in place so he can report sightings quietly. The drivers can see the stand-hunters’ positions on topographic maps on the screens of their units.

As the drivers begin the push they can keep track of one another thanks to the Rino’s “peer-to-peer” position reporting, which, at the push of a button, transmits their locations to the rest of the group. The stand-hunters are literally watching the drivers move toward them and the drivers are shifting positions to fill in gaps.

Before you purchase a Rino, make certain that it is legal to use handheld radios while hunting in your state. The unit also has a clock, a stopwatch, an alarm, a vibration mode for “silent” calls and a 12-channel GPS that can store 500 waypoints. ($211 for the Rino 110 without the topographic mapping feature, $311 for the Rino 120; 800-800-1020; www.garmin.com)

The Alpha
Choosing a knife has as much to do with fashion as it does with usefulness. (Ask yourself: Do knives really need camouflage handles?) So at first glance we were pleased to see that Buck’s Alpha looks like a deer knife. Upon picking it up we found that its in-hand feel is solid and well balanced, and when opening the Alpha we heard a smooth click, indicating a tight locking mechanism. We thought that its 41/4-inch drop-point blade with a gut hook was just right. And we liked that the knife comes in both folding- and fixed-blade designs with either a wood or a rubber handle-sorry, no camo. (From $70 to $116 for the fixed blade, $66 to $96 for the folder; 800-215-2825; www.buckknives.com)