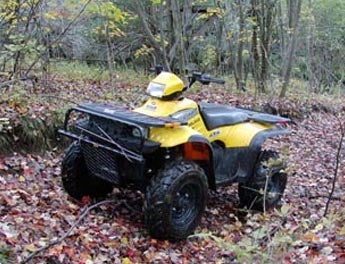 Installing a track kit on an ATV might seem a little over-the-top-sort of like Mad Max builds a four-wheeler-but there’s no question that replacing wheels with tracks is a surefire way to boost the traction and flotation performance of just about any ATV. Tracks offer up to four times the “contact patch” on the ground of a typical ATV while spreading the weight of the vehicle over a much larger area. The ground pressure under each track can be less than 1 pound per square inch, so the ATV can “float” over very soft terrain, such as snow or marshy ground, where tires would dig in and create deep ruts.

So if tracks are such a good idea, why do ATVs have wheels? Because wheels work better in all but the most extreme conditions. A track kit adds more than 150 pounds to an ATV and makes it wider and longer. Tracks also make ATVs harder to steer at low speeds while creating mechanical drag that sucks up horsepower. That said, if you spend a lot of time on boggy ground, as waterfowlers do, or in deep snow, a track kit might be just the thing to keep your ATV working all year round.

Last season a friend of mine had his dealer install a track kit made by the Canadian firm TJD and distributed worldwide by Kimpex ($2,995.00; 800-777-7073; www.kimpex.com) on a Polaris Sportsman 500. The kit proved itself extremely capable in winter trials on a tract of private property in northern Wisconsin. The Polaris motored through knee-deep snow with ease, cruising up hills that would have stopped a wheeled ATV given the limited traction available. One compromise for all this extra traction is a 40 percent loss of speed, due mostly to the 14-inch-diameter track-drive sprockets-a big drop in drive ratio from the standard 25-inch tires.

[pagebreak] All of these kits mount to the ATV wheel lugs and require a brace on the frame to keep the entire track unit from over-rotating. Each kit is available for more than 40 ATV models from seven manufacturers and for some utility vehicles such as the Kawasaki Mule and Yamaha Rhino.

Bear in mind, however, that track kits will make an ATV too wide to use on most public trails. You should also discuss with your dealer the warranty implications of installing a track kit on a new ATV. One dealer I spoke with said that he’s certain a track kit will strain some ATV steering components if the machine is abused, so slow and steady is the way to ride with tracks.

Quick Tip
The radiator and fan of a liquid-cooled ATV can become crusted with ice when you’re riding in snow. Clear the radiator frequently to prevent overheating. Also check the throttle linkage for ice, which can form when a wet ATV is parked in freezing weather.

Stay Warm This Winter
WINDSHIELD
The best way to enhance the cold-weather comfort of any ATV is to install a windshield that’s tall enough to protect your face, torso and hands. The new Moose Fairing Windshield ($179.95; www .mooseutilities.com) combines a clear windscreen with a thicker, polyethylene lower section that incorporates handguards. It attaches easily using quick-release handlebar clamps that fit most ATV models.

HOT HANDS
Make winter riding even more comfortable by installing a set of heated handgrips. Kits available from Polaris and Arctic Cat plug right into those models, and aftermarket kits from Kimpex and Moose will work on almost any ATV. Prices range from about $40 to $70. To avoid a dead battery, be sure to wire the grips to a circuit that’s powered only when the engine is running.