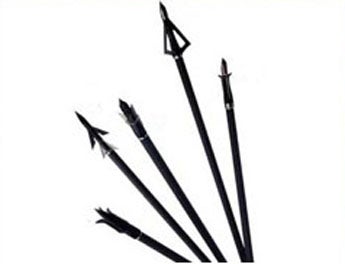 The real measure of a broadhead’s worth is the amount of penetration it achieves. As a result, broadheads have been test-shot into such materials as foam, cowhide, plywood, sand, even plastic bags filled with beef livers-all in an effort to rate their performance. Now, in an attempt to produce still more meaningful results, I’ve added lard to the list.

The specifications for this experiment were laid out by me, but my father, Jim Winke, did the testing. In fact, he spent two months creating the concoction of rendered animal fats that we used for the target. (Our first thought was to use ballistic gellatin, but we found it to be too expensive after we considered how many shots would have to be fired to complete this test.) The mixture was perfectly homogenous (a necessary element of any broadhead test). After every 25 shots the mixture had to be remelted, cooled and stabilized at 46 degrees in order to keep all things equal. Three arrows of different weights were used; one was made of aluminum and two were made of carbon. All three were tuned and shot from a shooting machine firing a 70-pound bow with a 30-inch draw length. Speeds were recorded on each shot to ensure that the system was working properly.

We tested 19 broadheads. In selecting them, we tried to pick from among the most popular broadheads on today’s market, while being sure to include heads that represented the mostwidely used styles. While 19 is far short of the total number available (we started with 20 but one has since been discontinued), had we tried to test them all using this time-consuming procedure, it would have taken years instead of months to complete the project. Therefore we can only compare the broadheads that we did test. If you don’t see your favorite one listed in the accompanying chart, it is not because it is inferior. It simply was not tested. Each broadhead was fired five times on each of the three different arrows, for a total of 15 shots per broadhead. To make sure that the blades on the mechanical heads opened on impact and to simulate an animal’s hide, we draped a wet chamois cloth across the front of the target.

To come up with the final score, Jim took the five penetration measurements that each broadhead achieved with each arrow, threw out the highest and lowest number from each group, added the remaining three measurements of each group together and then averaged the remaining nine readings. (Jim also shot each broadhead and arrow combination into a 12-inch-thick foam broadhead target to compare the results with those measured in the medium, and found that the order from the best broadhead to the worst was nearly identical in the foam.)

The test also indicated that carbon arrows can penetrate better than aluminum shafts of comparable or even greater weight. To better compare the penetration differences of the arrows, I averaged the readings for each one individually. The carbon Beman ICS Hunter 340 (which averaged 8.63 inches) penetrated more deeply than the Carbon Express 400 (which averaged 8.40 inches) and the aluminum XX78 Super Slam 2213 (which averaged 6.94 inches), even though the ICS was the lightest of the three arrows.

This was not a conclusive aluminum versus carbon test. To get meaningful results, many more arrows would have to be tested, and aluminum and carbon arrows of the same weight and with identical heads attached would have to be shot and their penetrations compared. The results, however, are worth noting-there were just too many shots fired here to ignore. Explaining exactly why lighter carbon arrows out-penetrrated a heavier aluminum arrow is difficult, however. I can only speculate that because the carbon shafts had a smaller diameter they experienced less drag when penetrating the lard.