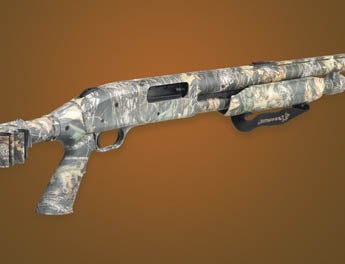 Pros: Adjustable stock and sights are a boon. Hand strap on forend is surprisingly effective and comfortable.
Cons: **Tang-mounted safety requires excessive hand movement to use with a pistol grip-configured stock.
**Final word: This 835 is an innovative turkey gun.

File Mossberg’s Tactical Turkey shotgun in the “Why didn’t someone do that sooner?” category. This innovative new gun goes a long way toward curing problems that have long plagued turkey hunters.

The problems are mainly the result of many gunmakers’ failure to recognize the shooting difficulties unique to turkey hunting. In other words, a camo paint job and an extra-tight choke does not a turkey gun make. The most egregious fault of many so-called turkey guns is that the stock dimensions are the same as that of other bird guns. This means they have a length of pull of about 14Â¼ inches and dimensions at comb and heel that are best suited to wing-shooting, where the hunter is standing or in an upright position. Turkey hunters seldom shoot at flying targets and are typically in huddled, humped-over positions in which the dimensions of a wing-shooting gun are a detriment, because they make aiming (note I said aiming, not pointing) the gun awkward and uncomfortable.

A Smart Stock: The Tactical Turkey’s stock hardly follows the classical lines shotgunners love, but it’s ideally suited to turkey hunting because it’s adjustable to a length that allows the best comfort and aiming from whatever position a hunter gets himself into. With a length of pull that varies a full 4 inches-from 10Ã‚Â¾ inches to 14Ã‚Â¾ inches-you can almost instantly adapt the stock length to your shooting position by simply pressing a release catch and sliding the stock rearward or forward.

Another common flaw of many so-called turkey guns is an inadequate means of aiming the shot charge. A densely choked shot swarm doesn’t allow much room for aiming error, which, combined with poor sights and further exacerbated by awkward stock fit, all too often leads to the “I can’t believe I missed” lament. Excellent Sights: The Tactical Turkey comes with the receiver drilled for scope mounts, but the gun’s windage and elevation-adjustable fiber-optic sights are excellent.

The Tactical Turkey can hardly be called a thing of beauty, and I tend to rankle a bit at the much overused term “tactical” being applied to a sporting arm, but whatever it’s called, Mossberg’s turkey gun might be the end of many “I can’t believe I missed” exclamations. Look for these innovations-especially the adjustable stock-to be adopted by other gunmakers.