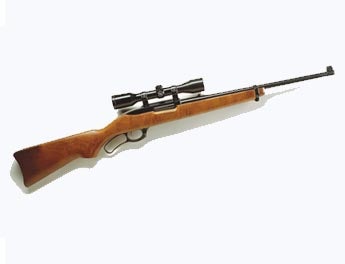 Despite the widely held belief that Smith & Wesson was the first maker of revolvers for the mighty .44 Magnum cartridge, the real fact of the matter is that the first .44 Mags on dealers’ shelves were Rugers. How this came about involved some industrial intrigue and was one of the late Bill Ruger’s favorite yarns. One of these days I’ll tell the whole story, but for now let’s just say that it helps explain why the cartridge was a Ruger favorite. Not only did those early .44 Mag. Blackhawks help secure the success of the Sturm-Ruger brand, but the cartridge itself was a favorite of Ruger’s in the hunting field.

Because of these and other successes, the .44 Mag. became a Ruger mainstay, with an endless outpouring of rifle and pistol models for the big handgun cartridge. So it was in the course of normal Ruger events that when a lever-action Ruger rifle was introduced in 1996, one of the calibers available would be .44 Magnum. Ruger showed appreciation for guns he genuinely admired, such as the Model 99 Savage, by incorporating certain exterior features into the profiles of his own guns. The distinctive shape of the M-99’s lever is unmistakably copied in the M-96, just as the flat-sided, torpedo-tapered receiver was certainly inspired by Winchester’s old M-88 lever rifle.

The case colors of the M-99-style lever on the sample I tested meshed well with the smoothly polished black steel receiver, but the walnut-stained stock appeared to have been designed solely for manufacturing convenience, with very little stylistic consideration. Ruger scope rings, which come with the rifle, interlock with an integral rib atop the receiver.

The M-96 I tested fed smoothly from the spool-type magazine, with extraction and ejection of the fired cases requiring scarcely more effort than cycling the unloaded rifle. The only operational problem was a tendency of the magazine to snag in the well and resist quick removal.

When considering the ballistics of the .44 Magnum cartridge, keep in mind that when it is fired from an 18½-inch rifle barrel with a closed chamber, velocity is considerably higher than when it is shot from a shorter-barreled revolver. For example, the Winchester ammo catalogue lists a muzzle velocity of 1,230 fps for its Supreme loading of the 250-grain Partition Gold bullet when fired in a vented test barrel. But with that same load fired in a rifle, the velocity jumps to 1,810 fps, a considerable increase of 580 fps, and more than doubles the muzzle energy, from 840 ft-lb to 1,818 ft-lb, which gets it almost into .30/30 territory. What we’re talking about here is a light, fast-handling rifle and cartridge combo for close-cover hunting for whitetails, boars and black bears-which brings us to the matter of accuracy.[pagebreak]

Of the three Win-chester loadings tested-Super-X with 240-grain HP bullet, Supreme with 250-grain Partition Gold and the economical USA brand with 240-grain SP-the latter delivered significantly better accuracy. With the Supreme and Super-X consistently grouping as big as 4 inches or even more, the USA lot stayed within 3½ inches.

The .44 Mag. is a delight to handload, with many good bullets available; I wouldn’t be shocked to find some well-developed loads grouping reliably in the 2-inch category with jacketed or hard-alloy cast bullets.