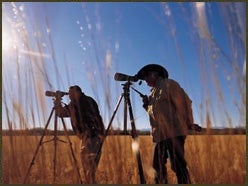 Magnification: Also called power, magnification is the extent to which objects appear larger when viewed through optical instruments. It is expressed by the number (or numbers) proceeding the “X” in specification numbers. An 8×32 binocular makes objects appear eight times larger.

Objective lens: The front lenses of optical instruments that receive light from viewed objects and forms the first or primary image, which is then magnified by the eyepiece. The number following the “X” in specification numbers is the objective lens diameter in millimeters. Accordingly, an 8×32 binocular has 32mm objective lenses.

** Diopter adjustment:** A device generally located either on the right eyepiece or as separate function of the central-focusing system of binoculars, used to correct for visual differences between the viewer’s eyes.

Exit pupil: The small circle of light that can be seen behind the eyepiece when an optical instrument is held at arm’s length and pointed toward a bright background. It is located at the point where the eye must be placed to see the full field of view (FOV). Exit-pupil diameters are calculated by dividing the objective lens diameter in millimeters by the magnification number. Therefore, a 10×50 binocular has 5mm exit pupils (50 ÷ 10 = 5).

Eye relief: Shown in parentheses in the test tables, eye relief is the distance in millimeters between the eyepiece lens and the exit pupil, where the eye must be placed to see the full FOV. An eye relief of about 20mm is needed to enable eyeglass wearers to see a full FOV. Eye relief for telescopic sights is measured in inches, with 3 inches the minimum for hard-kicking firearms.

Field of view (FOV): The maximum area that can be seen through an optical instrument.

Flare/aberrations: Flare is the scattering of non-image forming light within an optical system, which appears as stray reflections, ghost images or a veiling glare that obscures details. Aberrations are optical defects that degrade image quality. These include: Astigmatism, Chromatic Aberration, Coma, Curvature of Field, Distortion and Spherical Aberation.

Antireflection (AR) coatings: Used to reduce reflections from glass-to-air surfaces, thereby, reducing flare and improving light transmission. Better instruments have multilayer coatings on all surfaces, and are referred to as being “fully multicoated.”

Phase-correction (P) coatings: Used on the roof surfaces of roof prisms to reduce the image-degrading phase interferences that occur when light waves from the opposite roof surfaces combine to form images. P-coating is not needed on Porro prisms.

**Resolution: **The ability of an optical system to produce separate and distinct images of two closely spaced objects, such as the points on a deer’s antlers. We measured resolution in seconds of angle (SOA) using a USAF Resolving Power Test Target, consisting of progressively smaller sets of black lines on a gray background.

Twilight factor: A mathematical formula for comparing the low-light performance of optical instruments, which takes magnification into account. To calculate twilight factor multiply the diameter of the objective lens by the magnification and extract the square root of the product. We suggest using a handheld calculator with a square root function key.

For Riflescopes Only Mounting length: The maximum length of a scope’s main tube to which mounting rings can be attached. For easy mounting on full-length bolt-action rifles this area should be at least 5 inches long.

Parallax/focusing adjustment: This adjustment, consisting of a ring on the scope’s objective bell (AO) or as a knob on the left side of the W/E turret, eliminates parallax and simultaneously focuses the image for distances ranging from about 10 yards to infinity.

Point of aim (POA) Shift: Also called “track-out,” this is an insidious condition, peculiar to variable-power scopes, in which the POA shifts during power changing.

Tracking: A riflescope’s ability to respond precisely to changes in the windage and elevation (W/E) adjustments.