How to make your bow whisper quiet. 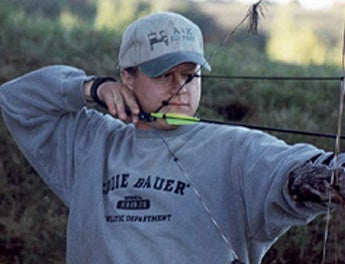 Before the start of archery season last year, I was convinced that it wasn’t possible to make a fast bow shoot quietly. But then, while getting ready for the season, I souped up a Hoyt UltraTec with all the latest silencing goodies and was immediately proven wrong. The bow was quieter than a pellet gun, even though I was shooting carbon arrows at nearly 300 feet per second (fps).

Twice during the preceding deer season I took shots at bucks when other deer were right under my stand, and both times the shot didn’t spook a single deer. In fact, when I misjudged the distance on an eight-pointer, and shot low, the buck didn’t take off. (I didn’t miss the buck a second time.) Bagging that deer can be attributed to just one thing: a quiet bow. Here’s how you can make your bow as silent as mine.

The Bow
In addition to the Hoyt UltraTec, I’ve shot three other bows in the past year that were quiet: the Browning Mirage SX, the PSE Quantum and the Mathews Q2 XL. In general, today’s high-let-off bows are noticeably quieter than their predecessors made just three or four years ago. Despite these gains, however, there are still a few models that just can’t be silenced. For this reason it’s important to test-fire any bow before you buy it. If, when you do shoot it, all you hear is a low-pitched thump of the limbs and a twang from the string, the bow is definitely a keeper.

The Limbs
Limb Savers from Sims Vibration Laboratory (360-427-6031) remove nearly all the vibration from the limbs on release. There are other good types of vibration reducers that are available on both limbs and risers. When buying a bow, be sure to take them into consideration.

**The Stabilizer **
Independent testing done in PSE’s vibration lab proves that a good stabilizer will reduce vibration in the bow. The most effective models are those that have some type of flexible mounting system so that most, or all, of the stabilizer’s weight can be used to oppose recoil and vibration freely.

The String
The most effective string silencers I’ve tried are Sims’s String Leeches. These little rubber S-shaped units remove nearly all the string’s twang. Leeches aren’t very durable, so wait until just before the season to install them.

The Attachments
The rest, sight and quiver you choose have a major effect on how quietly your bow will shoot. The quietest accessories are those with the fewest moving parts. Select rugged, no-nonsense rests and sights that don’t vibrate audibly when you pluck your bowstring.

One way to beat quiver noise is to buy a model that detaches easily. Then, when you get to your stand, you can just take it off and hang it nearby.