Everything you've ever wanted to know about collecting duck stamps. 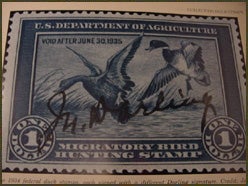 I’ll admit, I’m a rabid duck hunter. I love old duck guns and old duck art. I like calling ducks and shooting ducks and eating ducks (though I hate cleaning them). I even named my boat the Quacker Whacker. Most of all, I love collecting duck stamps.

To provide a little background for those who may just be starting a collection, the first Federal Duck Stamp was issued in 1934 at the request of President Franklin D. Roosevelt. The first artist was Jay “Ding” Darling, a political cartoonist for the Des Moines Register, who would later become a frequent contributor to Outdoor Life and eventually one of the early winners of the Outdoor Life Conservation Award.

The first stamp depicted two mallards about to land. It cost one dollar and was given to then Washington postmaster W. Mooney after Darling signed it. Years later, Mooney sold his stamp collection to George Elam for $50. Elam, in turn, later sold the stamp collection, but he kept the signed duck stamp. Some years later he sold the stamp for $10,000 to Bob Dumaine, author of The Duck Stamp Story (a must-read for duck stamp collectors). But wait, it gets better!

Dumaine then offered the stamp to two dealers for $12,000. They passed, but that didn’t stop Dumaine who subsequently found the top seven stamp collectors in the U.S. and offered it to them. Mrs. Jeanette Rudy of Nashville, Tenn. bought the stamp for a whopping $275,000, which just goes to show why collectors pay more than delers- they have no profit motive.

If you’re of a mind to begin collecting duck stamps, or would like to add to a collection you’ve already started, here are a few things to look for.

**Condition: **Stamp collections have many conditions–fine, extra-fine etc.–all of which affect their value. However, variables such as misprints or perforations in the wrong place can also raise values.

Pre-1941 Stamps: Any stamps printed before 1941 will also command a premium. That year the Postal Department made a policy decision to destroy all stamps printed prior to that time because they did not realize the huge profits to be made by selling stamps to collectors. The U.S. Postal Service now caters to stamp collectors because they buy stamps in sheets, singles and First Day Covers with no intention of ever using them. By constantly issuing new stamps for collectors, which can be printed for next to nothing, the department generates millions of dollars in annual revenue.

Signed Stamps: Any stamps that are signed by the original artist are always worth more. Look for them at the estate sales of famous people. Many presidents, athletes and movie stars have collected duck stamps. Babe Ruth and Clark Gable were both avid duck hunters and collectors. I wonder where their duck stamps are?

Duck stamp artists are selected by a committee. The winner becomes an instant celebrity. There were only two stamps that did not depict live ducks–a 1959 black Lab stamp and a 1975 canvasback decoy stamp. After making their selection in 1975, the committee decreed that only live ducks could be used as subjects.

Individual states soon saw the Federal Duck Stamp program generating millions of dollars for conservation, so they started their own duck stamp programs–adding even more collectible stamps to the mix–so there’s lots out there to collect.

In a future article, I’ll list some must-have reference books for decoy collectors and tell you who paid the highest price ever for a decoy.