These heavy-duty pickups will take you to camp in style. 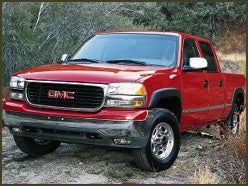 General Motors recently unveiled its 2003 Chevrolet and GMC full-size pickup trucks. Both feature redesigned sheet metal and a number of interior refinements. More interesting, however, is the engineering going on beneath the skin.

More Agile Off-Road
One innovation we’re watching closely is the Quadrasteer four-wheel steering system. At low speeds, Quadrasteer turns the rear wheels opposite the front wheels, reducing an extended-cab pickup’s turning radius from more than 45 feet to just over 37. That’s good news for anyone who’s tried to maneuver a big pickup down a narrow forest trail. When speeds pick up, the rear wheels steer in the same direction as the fronts. GM says those who tow will find that trailers sway less during highway lane changes because of the rear-wheel steering assist.

Quadrasteer was introduced last year, but only on the all-wheel-drive GMC Sierra Denali. General Motors is now adding the feature to its Chevrolet and GMC 1500 HD pickups, which were also introduced last year. These heavy-duty half-tons haven’t generated much fanfare, but they’re worth a look.

Borrowing Big Ideas
Actually, it’s a stretch to call the 1500 HD a “half-ton.” It rides on a 2500- series (three-quarter-ton) frame and suspension; borrows the 2500’s crew-cab/short-box body to provide ample seating for six adults; and is powered by the 300-horsepower Vortec 6000 V-8 from the heavy-duty side of the house. So how is the 1500 HD different from a standard 2500?

Special suspension tuning eliminates much of the harsh, choppy ride you normally receive from a heavy-duty pickup, while giving the 1500 HD hauling and towing capacities just a tick below those of the 2500. The 10,000-pound maximum trailer weight for 4×4 models, for example, is just shy of the 2500’s 10,300-pound rating. Further differentiation will come with Quadrasteer, which the pickups desperately need.

Other differences between the two pickups have more to do with marketing than engineering. The 1500 HDs are premium products, with top-shelf features such as leather seating surfaces, premium stereos and so on. As such they cost more than a base-level 2500, but they also give the General a worthy competitor to other high-end four-door pickups on the market, like the King Ranch edition of Ford’s F-150 Super Crew.