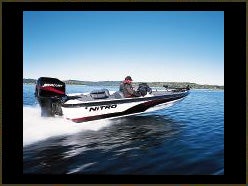 NITRO NX 896
Nitro, from Tracker’s stables, features the company’s famed volume discounts; at $22,595, it’s one of the least expensive rigs in this length, but there’s little left out. Goodies include a two-bank battery charger, three batteries, six-gauge dash including a Hummingbird/Tracker Pro 160 depth finder, insulated aluminum hatch lids with locks, bike seat for the bow, a spare-prop holder under the driver’s seat and a cell phone box with charger plug on the console. Nitro saves money on things like seat trim-plain gray instead of two-tone with piping, a single-axle trailer rather than a tandem, dual-cable steering rather than hydraulic and a carbureted outboard rather than direct-injection.

The carbureted Merc, a dinosaur these days though there are lots of them still around, stumbled repeatedly when we dumped the throttle, which resulted in hole-shot times in the five-second range. The hull could undoubtedly shave a second or two with an EFI or DFI. Even so, top speed with the 200 maxed out at 69 mph.

The boat is very stable until you get over 5,000 rpms, when you have to pay a bit of attention, as you do with nearly all pad boats north of a mile a minute. Stringers are fiberglass filled with foam, and the transom is two inches of pressure-treated plywood laminated inside multiple layers of fiberglass. This is a heavier boat than most of this length, which gives it a very stable ride as well as good lateral stability at rest. The stern is especially buoyant, making the boat less likely to take water on the aft deck.

RANGER 185 VS
While some anglers assume that Ranger’s well-known sticker shock applies to the whole line of this blue-ribbon builder, the company also makes some less costly rigs, including the 185 VS we tested. This boat looks just as upscale as the rest of the line, with lots of “Wow!” features like gold- metalflake trim lines sprayed right into the gelcoat, gold-look instrument bezels, multi-colored tuck-and-roll upholstery and lots more.

Several impartial (we think) dockside kibitzers picked it as the best- looking boat in our test, yet the price is moderate compared to the competition. Check out the hatch lids; they’re an inch thick, a fiberglass and foam sandwich that’s vacuum-bagged to make a smooth, perfect part, very light and very strong, plus it transmits almost no heat-a step up from the aluminum lids used by most builders.

Another neat touch is the centered depth finder, a Garmin 160 that mounts flush in the dash but can be popped out and disconnected for safe storage. We found legroom on the passenger side a little short-24 inches from the edge of the seat to the bottom of the footrest. The hull came out of the hole like a greyhound with an average time to plane of just 2.5 seconds.

Top end was not as impressive: 59.4 mph with the 150-horse outboard. This boat, in part due to bulletproof features like its “pulltruded” solid fiberglass transom, is one of the heaviest in its class. That fact means more durability and improved stability but also reduces top end a bit. The 185 VS also carries its width well forward, increasing fishing space significantly.