Here are some of our favorite quotes from the show. 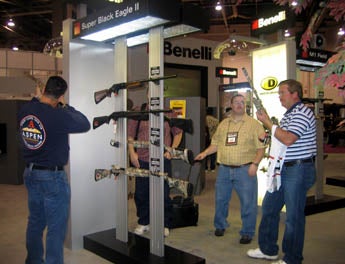 “There should be a law in Wyoming that says you can’t have more people living there than the deer herd.”

“They cut him off last night?”
“Yeah, he tried to convince the bartender that’s the way he always acts, but she didn’t buy it.”

“The only thing on the plate that was edible were the carrots, and they were still frozen.”

“Boy you’ve gotten fat. I’m surprised there’s enough fabric in the world to make a suit for you.”

“That man sent me the worst bottle of gin I’ve ever had.”
“Did you drink it?”
“Heck yes, the whole bottle. An outdoor writer will drink anything, as long as it’s wet.”

DAY TWO – February 10, 2006
Seemed like everyone had a good time on their first night in Las Vegas.

“He was on that lady like a bear on a gut pile.”

“Jack needs the gin bottle like a calf needs its mother’s milk.”

“Seeing you at SHOT Show is a like a little slice of heaven.”
“Whoa man, watch yourself.”

“You’re looking rough this morning.”
“I made some bad executive decisions.”

DAY ONE – February 9, 2006
Here are a few things we overheard while we were walking the trade show floor.

“Let me tell you, there’s no way he was getting me to smell his armpit.”

“You did a great job making those bloody marys.”
“I did a better job drinking them.”

“I wonder what he’s hunted this year? I’ll have to ask him.”
“No you won’t. Just say hello and he’ll pull out the pictures. Then you’re stuck for an hour.”

“He spends so much money hunting in Zimbabwe I bet he could buy the whole dang country.”

“That boy had a short career in the outdoors.”
“Cuz his politics got in the way. He probably supports Hillary.”

“I was duck hunting with a fella that used 40 robo ducks in his decoy spread. Took him 8 car batteries to keep them running.”