Do's and don'ts for aspiring collectors. Find out the low down on fishing reels. 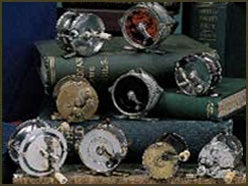 Fishing reels in one form or another have been in use since before the time of Izaak Walton, but it remained for Kentucky jewelers and watchmakers to put them on the map as the sporting collectibles they are today. A brass reel made in the 1820s by Kentucky’s George Snyder sold at auction two years ago for $31,350, and while this record- setting price is not indicative of other values, it does demonstrate the growing interest in early American fishing reels. Other Kentucky makers you should be looking for include Meek, Milam and Sage. Their work outshines that of early New York and New England craftsmen such as Clerk, Conroy and Terry, who are nonetheless an important part of the reel story and very collectible as well.

The era of fine, handmade reels is a continuing part of our history, but things changed after the Civil War, when the machine age brought fishing reels within the financial means of the common man and railroads enabled him to reach heretofore inaccessible lakes and rivers. The years from the Civil War to the beginning of World War I have been called the golden age of American reel-making by many collectors. If we note the fine-quality materials, workmanship and innovative design of the reels produced during the period, it is hard to disagree.

Golden-age makers include Leonard, Orvis, Meiselbach, Talbot, Vom Hofe and many marginally lesser lights who left a wealth of material that is collectible and yet a reasonable entry point for someone new to the field. These years also saw the beginning of mass- produced reels by manufacturers such as Heddon, Hendryx, Pflueger, South Bend, Shakespeare and others whose top-of-the-line output is not to be overlooked and is perhaps the most economical choice for newcomers.

Not all collectible reels are necessarily antique or even very old. Examples from the 1940s and later by makers such as the House of Hardy are good investments if you find them at bargain prices. So too are modern reels by the better known makers such as Bogdan, Orvis, Pate and others.

_Coykendall’s Rules of Collecting No.1: Never pass up a bargain. If you don’t want a given “steal” for your own collection, buy it anyway. You can always sell it, or, better yet, trade it and get whatever it is you collect in return. _

This first column of an outdoor life series is akin to “Reels 101,” but even a survey course would be incomplete without serious attention to the matter of condition. When considering the acquisition of any given reel, you must first examine it for flaws, replaced parts, missing or damaged screws or nuts and, most important, its working order. If the reel is a truly rare one, small flaws can be overlooked, but they cannot be ignored and will adversely affect the overall value. Flaws can make more common reels virtually worthless.

Collectors sometimes have the compulsion to “clean” or otherwise “improve” the condition of a fine old reel. More collectibles have been ruined by fumble-fingered fools than you can begin to imagine. Don’t you be the one to undo what made a reel collectible in the first place. If you follow a few simple guidelines, you’ll save yourself later anguish and ensure that the value of your collection is maintained:

Coykendall’s Rules of Collecting No.2: When in doubt, don’t-at least until you seek expert advice.

Collectible fishing reels come in all shapes and sizes and at all prices. At some point you will probably have to decide what type you want to specialize in: Fly reels, baitcasting reels, deep-sea reels and even early sppinning and automatic reels all can make up worthwhile collections. The choice is yours, but no matter what you decide to collect, it is the collecting itself that separates the men from the boys. This is where the reel story becomes an adventure rather than mere shopping.

If you have the wherewithal, auctions and catalogs present an attractive and relatively quick method of building up a collection. If, on the other hand, your funds are limited, don’t give up. It’s time to start haunting barn, house and estate sales and the “antiques centers” that have popped up in recent years. Whatever the manner in which you choose to acquire fishing reels, you owe it to yourself to learn all you can. Get at least one good book on the subject and send for the most recent catalogs offered by respected antique tackle dealers and leading auctioneers. My recommendations include: