Return of the Vanguard

The Weatherby Vanguard is more popular than ever. 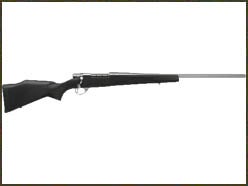 Our problem has always been that we’re emotionally invested in the Mark V,” says Brad Ruddell, Weatherby’s vice president of sales and marketing. “To us, it’s always been the Weatherby rifle. But our customers think differently. When they get a Vanguard, as far as they’re concerned they’re getting a Weatherby.”

The Vanguard rifle came into being in 1970, when Roy Weatherby was looking for a less costly rifle than his flagship Mark V. He found it in the Japanese-made Howa Mauser, a slick bolt-action that was far less costly to produce. The rifle he built around it was called the Vanguard. It was offered in standard calibers and was a good seller until 1994, when Weatherby’s contract with Howa expired. The rifle went away but demand didn’t, and Weatherby brought back the Vanguard in 1996. Today, the company is selling four times as many Vanguards as it did eight years ago.

If you’re not familiar with it, the Vanguard lists for $495, comes in a choice of 11 non-Weatherby standard and magnum cartridges from .223 to .338 and is available in either all-stainless or matte-black metal. This year, the .257 Weatherby Magnum will be available. Still red-hot after all these years, it’s making a steady climb in popularity as more and more hunters recognize it as a terrific long-range, medium-game round. In 2004, Weatherby is getting behind the Vanguard big time with some very clever ideas. The first, says Ruddell, is “countertop displays with the actual test targets that the rifles shoot at the factory. We put a test target in the box, and the guns in display racks have hang tags that invite the buyer to look at the target that gun shot.”

The second idea is more basic. It’s a very slick, injection-molded composite that comes in dark gray-very clean, very high quality. And it’s made in the famous Weatherby profile. “We tried for years to give people a classic stock, and I think we tried no fewer than three different designs,” says Ruddell. “But they want a Weatherby stock, and we’re giving them one.” If shooters would like something fancier, that brings in the third idea-customizing. Customizing is now a big business at Weatherby, and it means more money for dealers. A customer can go to www.weatherby.com, go down a list of 20 performance and appearance options, print out an order form with the features he wants, take it to any Weatherby dealer and get his rifle in short order.

Finally, there is co-op advertising. Under this program, eligible dealers are offered reimbursement for advertising in local media. This allowance can amount to up to 3 percent of the current year’s net direct Weatherby product purchase, and it will show up as a credit in your Weatherby account. There is, however, a provision-minimum allowable advertised price (MAAP). If you advertise a Weatherby product below the MAAP price, you lose your co-op ad credits. According to the dictionary, “vanguard” means “the leading position.” Thirty-four years ago, Roy Weatherby chose a better name than he knew. Booth #643.