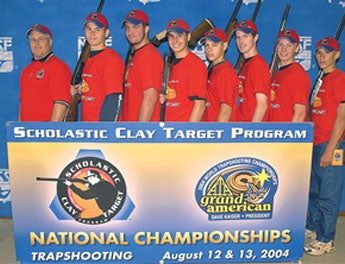 When the president of the Amateur Trapshooting Association says that the National Shooting Sports Foundation’s Scholastic Clay Target Program is the future of the shooting sports, people take notice.

When the owner of a now thriving range in Tennessee says he would be out of business if it weren’t for SCTP, you get an idea of the real financial impact of the program.

“The success of our scholastic shooting programs in thirty-five states clearly demonstrates that community-based programs are the key in creating opportunity for young people to get started in the shooting sports,” says Doug Painter, president of the NSSF.

If you are not familiar with the scholastic shooting program, some background is in order. Four years ago the program began as the Scholastic Trap Program-trap shooting was selected as the initial activity because of its popularity. Its success prompted the expansion of the program to embrace skeet and sporting clays. Meanwhile, the Scholastic Rifle Program (SRP) has just finished its second year.

Trap squads are made up of five shooters; skeet, sporting clays and rifle squads, three. Each shotgunning squad has a coach and practices at least six times leading up to a state shoot. The three top squads at the state trap championships advance to the national championship held at the Grand American. Participants in the state shoots for skeet and sporting clays are invited to the national championships for those sports. SRP holds monthly matches, with top scores posted on the NSSF Web site, at www.nssf.org /srp. Shooters in the time-and-accuracy competition can compare their scores on a national basis.

The numbers and the growth of these programs have been impressive. Participation has been on a steady rise, with a 25 percent increase last year. At Vandalia, Ohio, for the SCTP national championships, the 1,062 SCTP competitors accounted for almost 15 percent of the total attendance at the Grand American. SCTP participation at the Grand was up by 142 shooters over the previous year. Participation in SCTP nationwide has jumped from 700 young shooters in 2001, the first year, to 4,200 in 2004. In addition, the purchasing power of these young people was apparent as Vendor’s Row sold out its youth-sized merchandise and also sold a considerable amount of shooting accessories and even shotguns for entire squads.

“SCTP is the future of our sport. Never before have we seen such an influx of youth, optimism and talent. And the best part is, while many programs tend to draw youth participation from within the ranks of existing shooters, SCTP is pulling in new and first-time participants,” remarks Dave Kaiser, president of the Amateur Trapshooting Association.

Similarly, the 200 young shooters who now regularly practice and compete at Big Springs Clay Target Sports, a shooting facility in Christiana, Tennessee, are the reason the range is in operation today. Alan Loveless, who comanages the facility with his wife, says, “Our range has become a vibrant, exciting place to be. There’s been a great ripple effect resulting from the young shooters’ interest.”

[pagebreak] In the second “introductory” year for the rifle program, SRP tied into many events in the Youth Hunter Education Challenge and 4-H state shoots, providing competition for 1,459 teams made up of 4,371 shooters. At the national match at Camp Perry, Ohio, 65 coaches from all over the country had the opportunity to be introduced to SRP, planting the seeds for the program’s growth.

The industry has been actively supporting the scholastic program, says Zach Snow, shooting promotions coordinator for the NSSF.

“Some manufacturers offer discounts to SCTP members,” he says. “They are willing to offer great discounnts on ammo when it is purchased in bulk, on porting guns, on gun cases and on guns. They also contribute to the support packages of ammunition, targets, pouches and eye and ear protection we offer to new teams.”

Snow says the rifle program has also benefited from the industry’s generosity.

“Some of our members joined us in the search for future shooters by donating key necessities to run these events,” he says. Among those necessities were rifles and scopes, which gave many young people the chance to shoot rifles competitively for the first time. Now, Snow says, some manufacturers are offering SRP members discounts on scopes, and he expects rifle manufacturers may follow suit. While expressing gratitude to members who have given support, he’d like to see even more companies come on board by offering discounts to both SCTP and SRP participants, making it more affordable for the young people to shoot.

The companies involved would be gratified by stories Snow hears from parents and coaches that tell of what these programs have done for young people’s confidence by introducing them to the sport. “One young person sold his snowmobile and bike so he could have his own shotgun,” Snow said. “Now he is a die-hard trap shooter. Another used to be overweight and was mocked by his peers for being large, yet not even playing football. Now, after placing in the states and doing well at the nationals he is much more confident in himself and everyone treats him with the respect he deserves.

“Most importantly, these programs have helped kids focus on an activity and a goal, and the end result has been better grades in school and a better overall outlook on life,” he adds.