The Skeeter ZX 250 was the widest and one of the heaviest boats in our test fleet and was near the top in terms of angling comfort, ride and overall convenience. 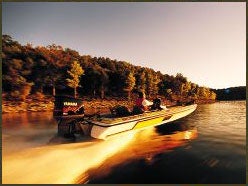 SKEETER ZX 250
The ZX 250 was the widest and one of the heaviest boats in our test fleet and consequently was near the top in terms of angling comfort, ride and overall conveniences. One of the most notable differences between this boat and others was seat height; at 14.5 inches to the top of the base cushion, it had the “tallest” seating of any.

I liked this approach because of the improved visibility over the bow on takeoff, and the console is tall enough (36 inches to the top of the windshield) to hide you from windblast in the elevated position. Some drivers may be used to a lower “Corvette-style” seating (low seat with feet extended), but you owe it to yourself to try these; it’s like sitting in your easy chair.

The ZX was fast despite its weight and beam, turning in a smoking top end of 76.3 mph. Note, though, that it was equipped with a 250 hp engine, a 50-horse advantage over most of the competition. Hole-shot times were average-around 3.6 seconds. With the standard Sea Star hydraulic steering, the boat was exceptionally easy to drive to 70 mph; beyond that, you become aware that you’re balancing on a very small pad, as is true of all high-performance rigs.

The Skeeter was one of the most expensive in our lineup but included a lot of nice extras such as the “Moor Mate” tie-up system, with spring-loaded dock lines that unroll neatly from inside the gunnels, a Teleflex LED depth finder and unique “Touch Pad” controls for all dash electronics. Skeeter also boasts a unique aluminum frame for the storage systems, as well as reinforced and foam-backed hatch lids. The company says the frame is lighter than fiberglass and expands and contracts at the same rate as the hatch doors to prevent fit problems.

All-composite stringers are reinforced with heavy aluminum knee braces at the transom. You’ll also notice the absence of a motor well aft; the transom is fully enclosed, with rigging cables neatly exiting directly in front of the motor. The taller transom helps keep water off the aft deck when you slow abruptly-and like everything else about this boat, it just looks cool.

STRATOS 20 XL
For a relatively heavy boat powered by a 200, the Stratos delivered impressive performance, with hole shots consistently less than 3 seconds (average 2.8) and a top end of 69.3. Weight can be problematic if it cuts top end, but in this case there seems to be no penalty. And the boat’s mass plus the pad-vee bottom effectively knocks down waves, delivering a soft ride at the helm. The XL also displays plenty of eye candy, with slick fit and finish everywhere you look, and deep, rich color patterns sprayed into the CCP Armorcote gelcoat.

The bow panel is one of the best and includes lights, trim/tilt, aeration control and a flush-mount depth finder that blends seamlessly into the deck, just where you want it. Driving this boat with the standard hydraulic steering is a no-brainer; you have to try to get it going cattywampus, even above 65 mph, and the Teleflex Pro Trim allows you to keep both hands on the wheel to maintain control.

The rod lockers are lighted, as are most other compartments, and include racks for eight rods per side. There are 20 tackle boxes tucked away in vertical storage under the decks. Some boxes are rotocast plastic rather than fiberglass, requiring a bit more care with heavy objects, but the moldings seem thick enough to do the job. A dual battery charger is standard, as are two pumps for each of the livewells. Everything in the bilge area is neat, clean and double-clamped. The console windshield top is 36 inches off the deck, giving wind protection superior to those found in most other boats of this type. There’s 34 inches of legroom between the front of the seat and the footrest-2 to 4 inches more than in many other boats of equal length. The hull-stringer-transom assembly is warranted for life.

TRITON TR-21 PDC
Triton has to be ranked near the top in eye appeal, with its combination of brilliant metalflake AME 1,000 gelcoat, wrap-around burled-wood composite dash and lines that approach those of a stealth fighter. Triton scores with a one-piece fiberglass matrix stringer/bulkhead system that ties directly into the full-width all-composite transom. Stringers, deck, cap and hull are joined with space-age adhesives that the builder says are actually stronger than the fiberglass itself, and because the stringers are unusually broad, there’s a lot of contact surface for the adhesive to hold-some 290 linear feet, the company says.

Despite the bulletproof construction and more weight than on some boats, the Triton is fast, delivering 73.1 mph on top end. The weight shows a bit in the hole shot, which averaged about 3.7 seconds, but with almost no bow-rise.

The test model included the extra-cost Classic Package, which sports every imaginable option, including a Lowrance X-65 inset into the bow panel, tangle-free racks for 14 rods in the lighted rod boxes, pressure-pad dash switches and a Pro Air system that injects microscopic bubbles into the twin livewells. Each of these wells has three pumps. Sea-Star hydraulic steering makes driving the boat a pleasure, though the setup we tested required more skill to drive above 5,000 rpm than some others did.