The latest in today's LED flashlights. 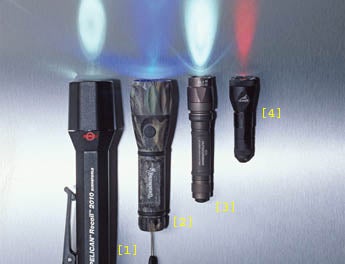 The first LED flashlights had one great thing going for them-long battery life-but little else. Their wimpy beams meant most units were considered backup only. No more. Today’s LED flashlights are beefed up and ready for prime time.

1. Pelican SabreLite Recoil LED 2010
What the Pelican SabreLite 2010 lacks in beauty it more than makes up for in toughness. The nearly indestructible Xenoy plastic body on the 2010 is designed to take a beating, and the company claims the flashlight is submersible to 500 feet. Running on three C batteries, the 2010’s LED bulb produces 32 lumens of light for up to 50 hours. ($60; 310-326-4700; pelican.com)

2. Browning Black Ice Hyper-Bright LED
Browning’s Black Ice Hyper-Bright LED flashlight features two red, two blue and one white LED that you can cycle through with the unit’s on button. The 3-watt white LED runs on two CR-123A lithium batteries and casts a beam out to 80 yards. The flashlight has a 24-hour burn time. ($119; 800-333-3288; browning.com)

** 3. Surefire E2L Outdoorsman**
Surefire’s E2L Outdoorsman throws an amazingly tight beam of bright light from a small package. The lightweight unit (3.2 oz.) is 4½ inches long; it fits comfortably in the hand and can clip to the brim of a hat. The aluminum body is anodized to resist corrosion. Red and blue filters are available for hunting and blood tracking. Using two 123A lithium batteries, the E2L produces 30 lumens and has a 6½-hour run time. ($115; 800-828-8809; surefire.com)

4. Gerber Personal Recon Light
For a stealthy, versatile flashlight, Gerber’s Personal Recon Light is hard to top. The Recon has a rotating bezel with red, green, blue and clear filters. The blue filter is especially useful for reading topographical maps in the dark; yellow highlighter marking your trail will fluoresce brightly in blue light without ruining your night vision. One AA battery illuminates the flashlight for more than 40 hours. ($30; 800-950-6161; gerberblades.com)