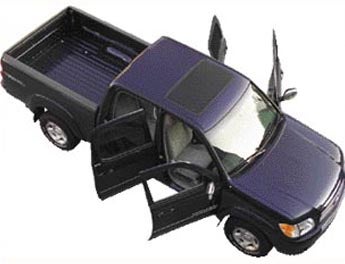 In the full-size truck arena, size definitely matters. When it comes time to pack for a week-long hunting or fishing trip, who wants to worry about not having enough room for his buddies, his dogs and all his gear? Size is one reason why some full-size truck buyers have previously shied away from the Toyota Tundra, a well-engineered vehicle that’s slightly smaller (even in its extended Access Cab trim) than the domestic half-tons. But not anymore.

Toyota’s new four-door Tundra Double Cab is significantly taller and wider than other Tundra models and is also longer than some domestic pickups. Super-sizing the truck allowed Toyota to add nearly 9 inches of legroom and 1½ inches of hip room for rear-seat passengers. That means three of your friends (XXL variety included) will easily fit in the back seat, even if they’re bundled up in bulky cold-weather gear. While some four-door trucks gain cabin space at the expense of bed length, the Double Cab’s 74.3-inch bed is generous, and longer than the bed on the Ford F-150 Super Crew. The Double Cab’s bed walls are also taller, increasing the truck’s cargo volume and payload capacity by as much as 160 pounds for some models.

Yet towing capacity shrinks some. Why? Toyota grew the Double Cab’s size and weight without a corresponding power increase. The Double Cab has the same 4.7-liter V-8 and four-speed automatic transmission as the other Tundras. The engine’s 240 horsepower and 315 foot-pounds of torque are fine for the smaller trucks but just adequate for the Double Cab.

Size hasn’t hurt the truck’s road handling, though. It still has the Tundra’s smooth ride and precise steering, even when equipped with the firmer TRD Off-Road suspension package. You’ll notice the extra length when negotiating tight trails or an urban parking garage, but not on the open road. We previewed the Tundra Double Cab several months prior to its launch, so prices had not been set. Toyota said the truck should be in the $28,000 to $32,000 neighborhood.