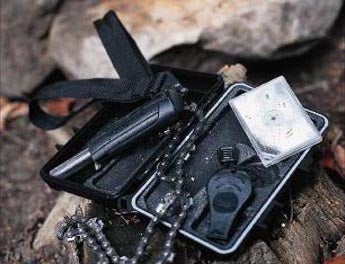 Sportsmen need to pack the best survival tools available. To help you choose among what’s out there, we crammed some of the most innovative new products into a duffel bag and headed for the Yukon and Alaska. Our bush plane didn’t crash, we weren’t torn apart by grizzlies and most of the time we had a roof over our heads. But that didn’t stop us from field-testing the gadgets to see how they’d hold up in worst-case scenarios. We took along products that are simple to operate and as effective as a knife or a compass-both of which we assume you already own and know how to use.

The Kit
Survival kits are often either too big to carry or too little to be of much use, but Ultimate Survival has put together a handy, lightweight set with all the basics. We used the Ultimate Survival Deluxe Tool Kit’s hand chain saw to cut through blowdowns about eight inches in diameter. It sliced through the spruce trees and didn’t bind up. Wet tinder, however, was another story. The “Blast Match Fire Starter” had trouble starting the tinder despite an impressive stream of sparks. I finally got a fire started using flakes from the kit’s “Wet-Fire Tinder,” which had the consistency of a bar of soap. A whistle and signal mirror are also included. All of these items come in a watertight plastic case that’s small enough to carry in a cargo pocket. ($69.99; 888-237-3239; www.ultimatesurvival.com)

**Rescue Laser **
Greatland Laser’s Rescue Laser Flares are small enough to fit in a cartridge belt, 8,000 times brighter than a flashlight at 1,000 feet and effective up to 20 miles away, day or night. One sunny afternoon I stood on a Yukon mountaintop and pointed the device’s beam toward a helicopter buzzing on the horizon. The pilot was instructed not to approach unless he saw a flash of red light. After half an hour my ride swooped down, although we couldn’t be certain I wasn’t saved by cockpit glare. Good for 15 hours of continuous operation on two alkaline N batteries, the flare also makes a nifty pointer during sales meetings. ($99.95; 866-889-3425; www.great landlaser.com)

Nothing Left to Chance
Personal locator beacons (PLBs), which have been saving the lives of mariners and pilots for years, were recently approved by the FCC for use on land. As of July 2003, a lost person in the continental U.S. can use one without paying a federal fine. So now your worst-case scenario will always end with whatever’s left of you being found. I registered my GyPSI 406 Personal Locator Beacon with Canadian authorities and carried this 17-ounce guardian angel in my photo bag. Once activated, it transmits a 406 MHz signal encoded with a unique number identifying its owner. Orbiting satellites pick up the signal and relay it to search-and-rescue teams within five minutes. ($1,667; 954-981-3333; www.acrelectronics.com)

Bomb a Bear
Tru-Flare’s Bear Bangers are well known in Canada-where this awkward term is used in normal conversation-but are just becoming available in some U.S. markets. Since my bear spray was confiscated at the airport, I bought a box of Bear Bangers, along with a pen-style launcher, before heading into the Yukon. The only grizzlies I saw were 200 feet below the helicopter, but I felt safer having my Bear Bangers ready whenever I ventured alone into the alder. Just screw one onto the launcher, pull back the spring-loaded pin and release it with your thumb. Much louder than a 12-gauge shotgun, the Bear Banger flies about 200 feet before exploding. The company’s flare, which uses the same device, will soon be widely available. ($40 for flares; 360-352-8911; www.truflareamerica.com)

Clotting Powder
No, we weren’t unfortunate enough to have to use QuikClot in the field. We decided to take Z-Medica’s word that the gritty chemical is capable of stopping bleeding. We are, however, impressed that the U.S. Army has enough confidence in thee product to send it along with troops to Afghanistan. QuikClot is a granulated mineral substance (you pour it on) that works by soaking up moisture and getting clotting agents concentrated at the surface of a wound as fast as possible. (About $20; 203-846-2811; www.z-medica.com)

Ice Yourself Down
Heat stroke can be deadly for anglers on an open boat or bird hunters traversing open prairies. First you feel light-headed. Next your heart starts racing. Then you pass out. It’s easy to ignore the signs until it’s too late. One hot and humid August afternoon I slipped Glacier Tek’s Cool Vest over my T-shirt and went on a moderate hike with a friend. At nearly five pounds, the Cool Vest has the bulk of a bulletproof vest. I noticed the cooling action of the “phase change” material (sort of like gel packs) immediately, but after an hour I couldn’t feel it at all, which is how it’s supposed to work. Following three hours of stumbling through muskeg, my friend was sweaty and exhausted, but I was cool and comfortable. After recharging the vest in the lodge’s fridge, I wore it to bed. ($160; 800-482-0533; www. glaciertek.com)

Dig Here
Avalanches are among the worst of worst-case scenarios. Last year 35 people-primarily snowmobilers-were killed in avalanches, the most since 1950. Provided you survive the impact, you have only a 30 percent chance of staying alive beneath the snow pack for more than 30 minutes. The Tracker DTS (Digital Transceiver System) from Black Diamond homes in on signals transmitted from other Tracker units. The digital interface is straightforward, indicating general direction and distance. We choppered up to a glacier and drew straws to decide who’d be “buried.” It took me nearly 40 minutes of circling the glacier to find my friend, but with a little more practice I could easily have cut that time in half. ($300; 303- 417-1345; www.bcaccess.com)

**Breathe Under Snow **
What if everyone in your party is buried? Black Diamond’s AvaLung II is the only product on the market designed to keep you alive under snow. I strapped the AvaLung over my jacket as if it were a miniature bagpipe. Most avalanche fatalities occur because victims rebreathe their own carbon dioxide, or because snow freezes around their faces into a lethal “ice mask.” Through a one-way valve in the tube, the AvaLung vents exhaled CO2 toward your back, and a filter extracts oxygen from melting snow. The company has already received reports of avalanche victims surviving with the aid of the AvaLung. ($100; 801-278-5522; www.avalung.com)

**A Clip-On **
For those of you who don’t like wrist-top gadgets-you already have a watch there, right?-the AltiTech from High Gear USA clips on to a belt loop or jacket zipper. A push of a button allows you to check altitude, compass bearing, temperature, time and barometric pressure. ($140; 888-295-4949; www. highgearusa.com)