Why It Won’t Start

Simple fixes to get your motor running almost every time. 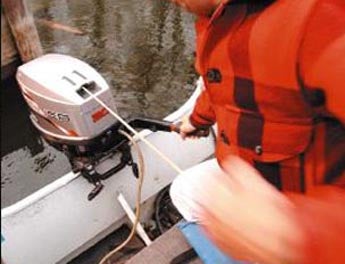 Outboard motors start a lot better than they used to. But there are still days when they behave like a mule that doesn’t want to leave its stall. When a motor won’t start, it’s almost always due to problems with either the electric current or the fuel. If the motor won’t turn over at all, make sure the throttle/shift lever is in neutral. If not, the safety lockout won’t allow the motor to start. And check the emergency stop lanyard-most motors won’t start if it’s not clipped into position.

Next, check the battery cable connectors to make sure they’re clean and tight. On old connections, clean both the posts and the connectors with a knife, sandpaper or a wire brush until they’re bright and shiny. Add a thin film of anticorrosive lubricant like Corrosion X and tighten the terminals.

Still no spark? Is the battery dead? Check it with a tester. A battery may have enough power to turn on your dash lights but still be unable to crank the engine. Or you may have a blown main fuse. Be sure to carry a spare of the correct amperage. If you’re getting spark to the starter but it won’t spin, the starter may be bad. On most motors, you can get home by pull-starting. Just be sure the key is turned on and the fuel primer bulb is pumped up before you begin pulling. Some larger motors with electric fuel pumps won’t start this way if their batteries are completely dead. The other possibility is that there’s a fuel problem. Make sure the primer bulb pumps up solid, indicating there’s fuel in the tank and that it is being supplied to the motor. (Amazing but true, fuel sensors on some nearly new boats will indicate you’ve got plenty of gas when the tank is bone-dry.) On portable tanks, make sure the fuel hose disconnects are firmly seated on both ends, there are no kinks in the line and the tank vent is open so there’s no vacuum to prevent fuel flow. Fuel problems are rare in fuel- injected motors. Carbureted motors still have the possibility of fuel draining out of the bowl when they’re tilted up, so put the motor down in the operating position and then pump the primer bulb until it firms up and try again. Too much fuel can also be a problem; if you smell gas, the motor is probably flooded from excessive choking or priming. Open the throttle and crank the motor a few times without choking or priming and the cylinders should clear. On balky motors, it helps to remove a spark plug or two, wipe them dry, reinstall and then crank up.

These quick fixes will take care of 90 percent of engine start problems-if you’re faced with that tricky 10 percent, you’ll probably need a mechanic to get you going.