Winchester Ammo expands its popular short magnum line with the addition of the all-new .325 WSM. 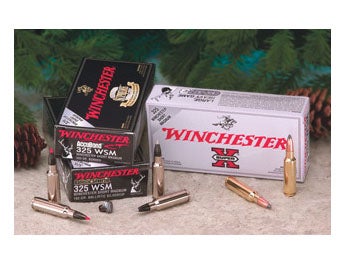 Shooters and hunters who prefer bigger-bore rifles have been eagerly expecting Winchester to finally step up and offer larger bullets in the Winchester Short Magnum series. For 2005, the ammo maker will make the big move, but the choice of caliber is a bit of a surprise.

Winchester engineers recognized the need for a cartridge capable of launching 200-plus-grain bullets. Naturally, they were also looking for a cartridge that would be accurate and have the stopping power needed for the largest of North American game and lower perceived recoil. Most shooters believed the natural choice would be a revamped .338 Win. Mag., but Winchester has instead opted for something different. The latest addition to the WSM platform will be the all-new .325 WSM.

The new cartridge is designed to deliver the high speed and flat trajectory of the .300 WSM and the powerful knockdown punch of the long-action .338 Win. Mag., but in a smaller, lighter and far more user-friendly (read lower-recoil) package.

Working in tandem with Winchester Ammunition, Browning and Winchester Firearms have each built line extensions of their popular rifles to accommodate the new cartridge.

The .325 WSM Browning A-Bolt Hunter comes in right- and left-hand versions. The Micro Hunter is also available in right- and left-hand versions, as is the Medallion. The Hunter FLD, Stainless Stalker, Composite Stalker and the White Gold Medallion complete the new line. Magazine capacity is three rounds (one in the chamber). The rifles weigh an average of 6.5 to 6.75 pounds, and the barrel length is 23 inches (except for the Micro Hunter’s, which is 22 inches). SRP: Starts at $734. Booth #401 and #513. (801-876-2711; www.browning.com)