Protect Your ATV in Bear Country

Bears love to chew on ATV seats and tires. I’m not sure if it’s the springiness of the foam or... 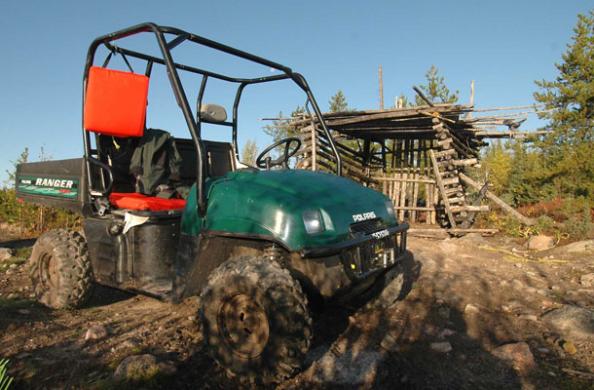 Bears love to chew on ATV seats and tires. I’m not sure if it’s the springiness of the foam or rubber, the smell, or just boredom. Park a vehicle in the north woods overnight, or spend the day fishing down the trail, and you may return to hundreds of dollars worth of damage and a less-than-comfortable ride back to camp.

If you live in extreme country, you must resort to extreme measures. Ken Gangler of Gangler’s North Seal River Lodge in the Canadian province of Northern Manitoba, has to protect three wilderness-stored UTVs that are used as shuttles to alternate lakes at his fly-out camp. It took over $1,000 worth of damages before he resorted to building log forts.

“We started using an electric fence powered by a solar panel, but if there was any kind of failure, the bears would have the seats ripped out in one night. It’s as if they knew the second the fence failed and the place looked like they had hosted a frat party,” said Gangler.

After several unsuccessful attempts to protect his UTVs, he started building spruce log cribs that were surrounded by barbed wire.

“We’ve gotten pretty good at building these jail cells for our old Polaris Rangers and can get it done in a day. They shake them a few times, but the barbed wire seems to keep the bears at bay. Without the wire they will tear the crib apart,” he said.

Look carefully at the Ranger displayed in this photo; the only remaining cushion is the headrest on the driver’s side and even that has a hole in it. All other padding has been ripped out. Boat cushions are being used as temporary seat pads until the new parts arrive.

With black bear populations growing throughout the U.S., you may want to think carefully about where you park and consider some bear proofing.