We may earn revenue from the products available on this page and participate in affiliate programs. Learn More › These... 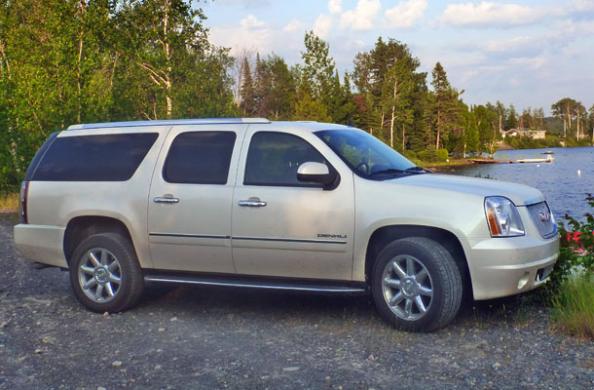 These days, the oversize luxury SUV is widely considered a vestige of the pre-recession heyday of the early- to mid-2000s, when people had disposable income and spent it on things like land yachts. However, these behemoth vehicles do still have a place on America’s roads, as evidenced by the fact that many manufacturers are still turning out — and selling — them. I had the opportunity to test-drive the 2013 GMC Yukon XL Denali on a recent vacation during which my wife and I traveled more than 1,500 miles. Not only did the Yukon provide ample room for a week’s worth of our luggage, coolers full of groceries, and more fishing gear than you’ll find in most Bass Pro Shops, I was pleasantly surprised that we only spent about $400 on fuel along the way.

Our well-appointed loaner wasn’t exactly what I’d consider a true outdoorsman’s vehicle (for starters, the color was listed as “White Diamond”), but in the end the Yukon Denali was an absolute pleasure to drive and served us well on our annual trip to the family fishing camp in northern Ontario.

Plenty of Muscle
Under the hood, a Vortec 6.2L V8 engine produces 403 horsepower and 417 foot-pounds of torque. Performance like that was particularly appreciated when it came time to push past slow-moving caravans of vehicles towing boats and trailers on the two-lane roads we traveled along for much of the trip.

Since our loaner didn’t have a tow package, we left the trailering duties to my brother and his pickup, but our Yukon had a listed gross vehicle weight rating of 7,400 pounds, so hauling even a 26-foot sportfisher wouldn’t have been an issue.

Luxe Accommodations
As you would expect from a vehicle with a base price of nearly $60,000, this rig has a galaxy of bells and whistles. The plush leather front bucket seats boast both heating and cooling controls, and we utilized both as the northern Ontario temperatures fluctuated between the mid 80s during the day and the high 40s at night. The Yukon XL Denali can seat up to 8 people, though we left the back row of seats at home in favor of more cargo space (49.4 inches of length and 60.3 cubic feet of volume versus 15.2 inches and 16.9 cubic feet with the third row installed).

A SiriusXM package allowed me to keep tabs on my Red Sox through the killer Bose sound system, and a DVD player came in handy when my wife had had enough of my company during the 12-hour drive and retired to the back to watch a movie. (Our rig actually boasted two DVD players, so passengers seated in the back two rows could’ve watched different things simultaneously.)

My favorite feature — one that would have come in especially handy if we were towing a boat or trailer, but was appreciated anyway while driving on Ontario’s breakneck Highway 401 — was a blind-spot alert. A little light would come on in the side-view mirror when another vehicle came up alongside us. Also, a rear-vision camera made backing the monstrous vehicle into parking spots a cinch.

One feature that we weren’t very impressed with was the built-in navigation system. GPS systems are pretty idiot-proof these days, so it was curious that an otherwise tricked-out vehicle would be equipped with such a convoluted and unintuitive system. When navigating to a hotel in Ottawa on our trip home, we abandoned the onboard nav system and used the Google Maps app on my wife’s phone instead.

That said, the 2013 GMC Yukon XL Denali served us very well. If you decide it might be a good fit for your next SUV purchase, and you plan on using it in some outdoorsy capacity, may I recommend skipping on the White Diamond and opting for something a bit more fitting — perhaps Carbon Black Metallic.