Here's a look at two of this year's most innovative guns. 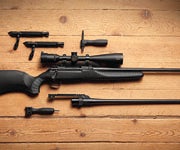 Getting more out of your guns. It’s a nice idea and is the philosophy behind two of this year’s most innovative guns. Both firearms have their virtues but face some challenges as well. Switch-barrel rifles have always been a tough sell for American shooters, and Mossberg will need to find out whether there’s a demand for a convertible shotgun. But both are cool.

In simple terms, the barrels on the Dimension are clamped to the receiver with a barrel nut that screws down, much the same way that the barrels on Savage rifles are held in place. With the Dimension, however, the barrel nut is machined with gear teeth that mesh with a special wrench that helps the shooter torque the nut to the correct tightness and loosen the nut when he wants to switch barrels.

To accommodate a full range of calibers, the Dimension offers bolts with four different face sizes and appropriately sized magazines, allowing one rifle to go from a .204 Ruger to, say, a .300 Win. Mag.

Barrels can be rigged with a fixed mount for optics so the shooter doesn’t need to re-zero the rifle after every barrel switch, though this mount makes removing the barrel nut a bit more complex.

The look of the Dimension, with its hog back synthetic stock and hogged-out barrel channel will not appeal to traditionalists but will doubtless find a following with shooters who have a techie bent.

Mossberg Flex
The concept behind the Flex has been gestating at Mossberg for several years and is now ready to be revealed. With the push of a button or twist of a lever, every major component of this shotgun can be swapped out in a matter of seconds. This represents a new high-water mark for configuring a shotgun for multiple uses. The core of the shotgun is a pump-action receiver that will be familiar to Mossberg fans, though it has a stout zine stub where different style stocks can be affixed. The stocks themselves also have a push-button release to attach butt pads of different thicknesses to alter length of pull. Forends clip on and off with the same simplicity. With the purchase of additional components, one shotgun can serve multiple uses.