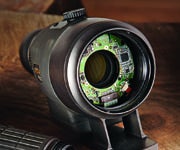 In its EL Range (left), Swarovski incorporates a fast, accurate laser rangefinder in the barrels of the binocular. Nikon’s EDG Fieldscope 85 VR (center) is stabilized with a vibration-reduction unit. The illumination module in Swarovski’s Z6i (right) remembers preferred intensities of reticle brightness.

Nikon’s remarkable, pricey, and heavy new spotting scope employs the same vibration-reduction technology found in many of its high-end camera lenses. The VR module contains velocity sensors that detect pitching (vertical movement) and yawing (horizontal movement). Every fraction of a second, these sensors fire data to a microprocessor, which makes compensatory adjustments to the lens, ensuring that the image is always delivered to the optic’s focal plane, even if you’re glassing in a gusty wind. The VR technology doesn’t make the scope see better, but it does eliminate much of the blur caused by shaking, creating a sharper image.

But all that electronics makes the Nikon fragile and pricey. My fears that it might not be durable enough for hunting conditions were confirmed when our unit blew over at the shooting range and slammed onto a concrete pad, and the lens separated from the body. After I quit sobbing–and wondering how I would ever cover the $5,500 bill–I put the pieces back together. The lens focused, but even more remarkable, the electronics fired and stabilized the image. The Nikon is not only ingenious but hardy.

Swarovski El Range
The laser rangefinder in Swarovski’s EL binocular is simply the best in the business. It’s not the fastest–​Zeiss owns that distinction–​but it’s the most sensitive, and the addition of an angle-compensating inclinometer also makes it one of the most useful. The ranging information is displayed as an LED readout over the main optical image, requiring twin diopters on the barrels to focus the display and the overall image.

Swarovski Z6i
The illumination module on this new riflescope is not only elegant, it’s also smart. It remembers previous intensity settings, illuminating a small aiming point with the flip of a toggle switch on the eyepiece. The switch has high and low settings, allowing the shooter to instantly select for subtle or bright intensities, depending on the situation. –A.M.