Then and Now: The Winchester ’94 Lever Action Rifle 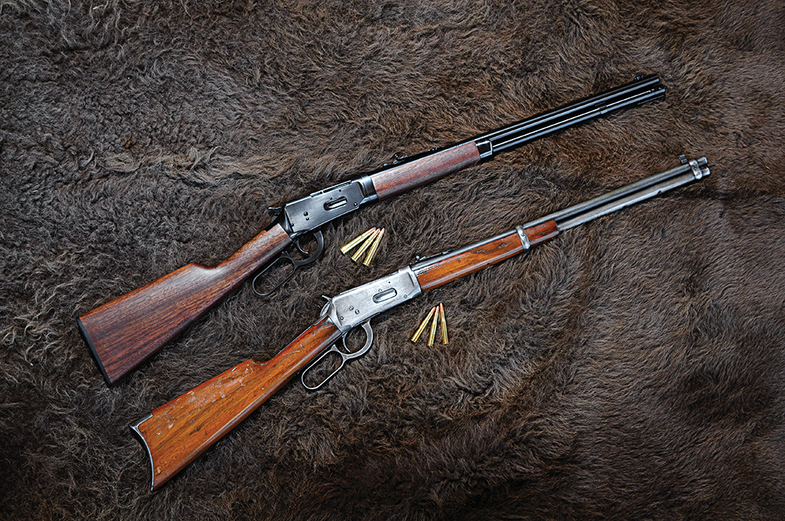 I strolled along, reluctantly following my wife into the house with the “Yard Sale” sign out front. Though she and my kids were brimming with excitement about treasures they might find hidden in the dark recesses of the century-old home, I was doubtful that it held anything capable of rousing my pulse.

Wandering into a back bedroom, I went on point tighter than a quail dog. Leaning in a corner was an old Winchester ’94 carbine—as trail-worn and tough looking as John Wayne in The Cowboys.

Twenty minutes later I was headed out the door with the old ’94 and a grin that lasted at least three days. I researched the lovely beat-up old lever-action: It was a saddle-ring model in .25/35, bluing all but worn away, and the air of a veteran about it. Sporting a serial number below one million, the rifle was manufactured in 1919. Almost a century later, this old rifle still shoots true and functions smoothly and reliably.

Winchester lever-actions in various models (’73, ’86, ’92) deservedly earned the moniker The Gun That Won the West. Arriving somewhat late on the scene, the ’94 is praised as “the ultimate lever-action design,” and is the last and greatest of a long legacy of rifles designed when lever-actions carried more authority than the law.

1895: Winchester improved its metallurgy, enabling the ’94 to become the first commercially available American sporting rifle chambered in smokeless-powder rounds: the .30 WCF (Winchester Center Fire, which became known as the .30/30), and the .25/35. With more than 7,000,000 sold, the ’94 still holds the distinction of being the best-selling high-powered sporting rifle in U.S. history.

1964: Winchester made changes to its manufacturing process, intending to expedite production and increase profits. The results were disastrous. Reduction in quality caused a universal outcry among Winchester aficionados. To this day, earlier rifles—generally referred to as “pre-’64” models—command a premium price over post-change rifles.

1982: Winchester improved (by modern standards) its cartridge ejection port to toss cartridges to the side rather than up, allowing a scope to be mounted atop the firearm.

Curious to examine the differences between my old original ’94 and the new models available on the market today, I requested a comparable rifle from Winchester. They obligingly sent me a brand-new Trails End model (a carbine-length firearm featuring Winchester’s rugged takedown system). It’s not an exact reproduction of my old rifle, but it’s close enough for accurate comparison. Winchester is not currently producing ’94s in .25/35, so I opted for a test rifle in .30/30.

I compared, handled, and fired the two rifles side-by-side. Here are the results.

Photos by the author