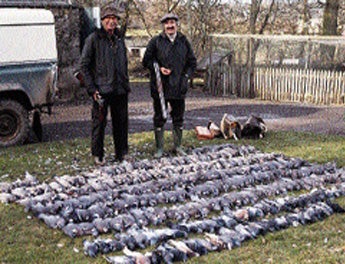 Picture yourself in a Scottish manor house. At your bidding are a butler, a housekeeper, a cook and a rosy-cheeked serving lass who blushes and curtsies, strawberry curls all a-jiggle around her lace cap, as she spoons up great dollops of clotted cream, thick as butter, for your scones. After you’ve packed away a breakfast that would feed a Highland Regiment, the gamekeeper presents himself, respectfully doffs his tweed deerstalker cap, and in a brogue so thick you scent the heather, says, “G’morning, Soyr, it’s a bit oof ah nor’easter bloo’en tah do us weel for ta’ boords. Ya goons ‘es packed ’em in tah Roover an awaitin’ yer pleasure.”

“Ooh, an’ Soyr,” he adds, “I spied a wee dingle of roost on one o’ yer fine goons. Took m’self the liberty of scroobin’ it away.”

This could be the beginning of a day of driven grouse in the best (meaning very expensive) Scottish tradition, but is in fact one of the best bargains to be had in bird hunting. The bird of the day, and the next couple of days, is the once ignored wild wood pigeon.

Why Pigeons?
Before you start wondering why anyone would travel all the way to Scotland to shoot pigeons, let me tell you that we aren’t talking about barn pigeons or the birds that strut around city parks, cooing at the little old ladies who toss them bread crumbs and making a filthy nuisance of themselves. Picture a dogfight between a hang glider and an F-16 jet fighter and you’ll get some notion of the difference between lazy city pigeons and the aerial acrobats that breed wild in the woodlands of the United Kingdom. If the gunning sportsmen of the British Isles had set out to breed the perfect game bird to challenge the skills of wing-shooters, they could have done no better than their native wild pigeon. This is why the wood pigeon has achieved cult status in England, with at least one full-time school teaching the finer points of shooting them.

Wood pigeons (Columbia palumbus) are the largest of the pigeon family, weighing over a pound and having a wingspan of up to two feet and a beak-to-tail length of about 16 inches. They nest up to three times a year, with estimates of their yearly numbers running as high as 10 million. Described as “edible targets,” they fetch about $2 apiece from game buyers from France.

The challenge of shooting plus the elegance of the amenities would indicate that hunting wood pigeons is a rather pricey sport, especially considering that estate owners are in the habit of charging visiting sportsmen many hundreds (even thousands) of dollars a day for gunning their driven grouse or pheasants. But the convergence of timing and circumstances makes shooting wood pigeons a lot more affordable than you think.

When to Hunt
The best time of year for hunting wood pigeons is in early spring, when big flocks of the birds raid newly seeded fields in the farming districts. As it so happens, this is also the low point in the British tourist year; hotels and inns offer their cheapest rates and airlines offer cut-rate fares. Likewise, the season for driven game-bird hunts has ended for the formal shooting estates, which consider themselves lucky to have even budget-priced guests to help offset the maintenance of house staff and gamekeepers during the lean months. Though prices vary depending on where you stay and hunt, the daily charges I’ve paid on the three Scottish wood pigeon hunts I’ve been on worked out to about the same as the daily rate of a good London hotel. The price of these hunts, however, included rooms-suites actually-fit for a duke, elegantly served meals, services of the gamekeeper (including blind building and decoy setups) and transportation to the shooting fields. One landowner was so glad to have us he even included shotshells.

Must-See Places
You can fly direct to Scotland, of course, but my favorite schedule (and the one I recommend) is to te an overnight flight to London that arrives early in the morning. After a long flight the temptation is to get some rest-but don’t. A busy first day in town wards off jet lag, so after checking into your hotel, pack away a big English breakfast and have a cabby drop you off at Berkeley Square. This puts you within easy walking distance of Holland & Holland, Purdy and Savile Row.

While at Holland make afternoon reservations for a couple of hours of instruction at its shooting grounds, which are a short train ride out of London. It’s time and money well spent because the instructors will fine-tune your shotgunning form and give you some idea of the angles to expect when the wood pigeons come zooming over the decoys a few days hence. Women especially love the refined Holland school coaching, and by day’s end you and your friends will be speaking-and shooting-with a British accent. The next day you’re off to Scotland. You can fly, of course, but the trains are comfortable and a ride through the beautiful and historic countryside of Great Britain is a wonderful education, with stops at towns and cities you’ve long known about from legend and literature. The estate’s driver is there to greet you at the station, a warm fire awaits you at the manor and for the next few days you live-and shoot-like a duke.

How Hunts Work
Unlike traditional driven-game hunts, where grouse or pheasants are flushed over the guns, the wood pigeon hunter goes to the birds. In fact, finding fields where they are feeding is one of the gamekeeper’s principal duties. In a survey of nearly 1,000 U.K. farmers, almost all reported crop damage by wood pigeons and nearly 90 percent of them also stated that they welcomed pigeon hunters. So gamekeepers network with local farmers to stay current on areas where pigeons are feeding.

Typically a hunter will shoot over two fields in a day, with a picnic lunch in between. But if a field isn’t producing enough shooting the gamekeeper may make a quick change to a better field. Wood pigeons decoy like waterfowl, and generally the set is fan-shaped, with a “landing zone” about 30 yards in front of the blind. The blinds themselves are usually portable camo-net affairs backed against tree lines or hedge growth that borders Scottish fields. The flight paths of pigeons, which feed throughout the day, tend to follow tree lines and fencerows, offering the gunner pass-shooting as well as shots over the decoys. It is the decoy shooting that most frustrates newcomers to wood pigeon hunting because of the birds’ ability to accelerate like a rocket. An incomer may seem like a no-way-can-I-miss target when he floats in toward the decoy spread, but then, faster than you can shoulder your shotgun, he has lit his afterburners and is in a steep climb-out that’s hard to keep up with. This is why most first-time shooters are acutely humbled.

Guns and Loads
British law now forbids repeaters, limiting you to an over/under or side-by-side. Unless you’re utterly determined to use a smaller bore, a 12-gauge is the only sensible choice, both as a matter of ammo availability and practicality. Wood pigeons are tough birds that make themselves even harder to kill by often giving you “bye-bye” shots at their tail feathers. Improved-Cylinder and Modified is a good choke combination to start the day with, but take along a full set of screw-in chokes.

There’s good shotshell ammo in the U.K. Some of its “field” loads, however, kick like our magnums, and a fast day, which could be 200 or more shots, will leave you bruised and flinching. I seem to do best overall with 11/8-ounce target loads and No. 71/2 shot.

Perhaps the greatest fascination of shooting wood pigeons is that just when you think you’ve mastered all their tricks they change the rules and the humiliation starts all over again.