How a professional instructor introduces a newbie to scatterguns 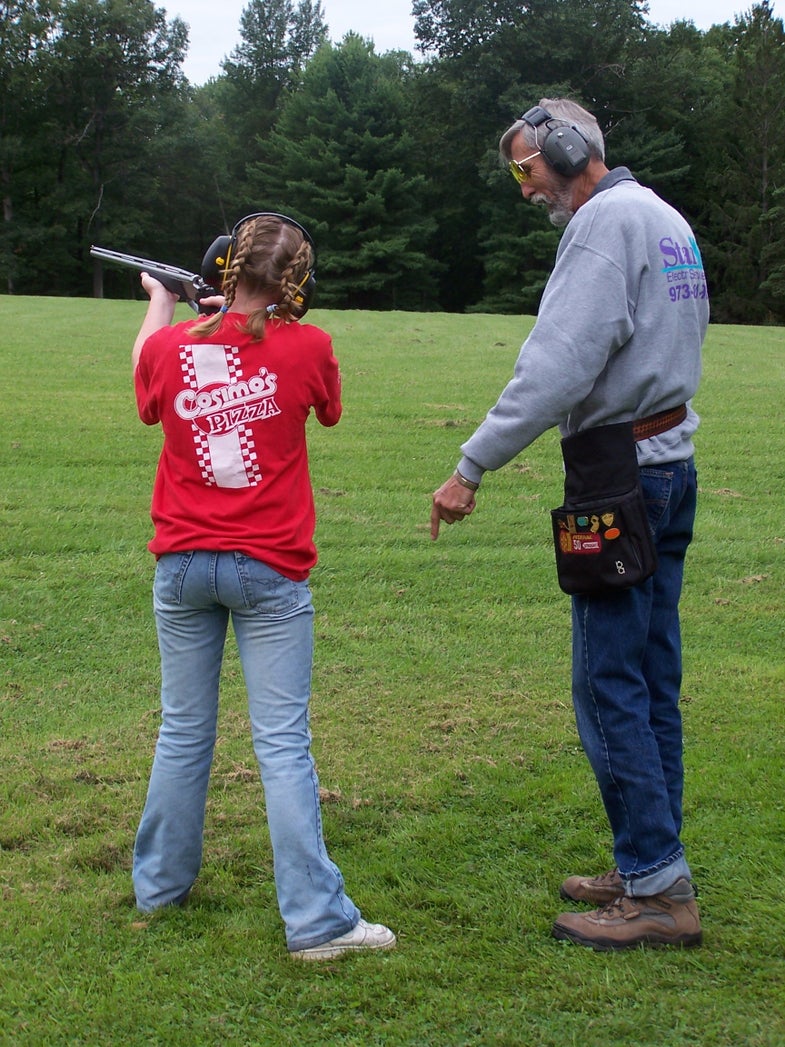 Of all the shooting sports, shotgunning is certainly the most social. Whether you’re walking the uplands in pursuit of pheasants, crouching in a duck blind at sunrise or working your way through a round of sporting clays, having others along only enhances the experience. The social nature of shotgunning also makes it an ideal way to bring new shooters into the sport.

That’s the good news. The bad news is that if you’re anything like me, most likely you have no business coaching a first-timer with a shotgun. I know, I can hear your objections now. The first time you picked up a shotgun you probably had a friend or family member at your shoulder giving you pointers, and you turned out fine. You also probably have some years of shooting under your belt and during a round of skeet score well enough not to die of embarrassment. And you’ve probably already taken new shooters afield without any discernible harm being done. So coaching a newbie with a scattergun isn’t beyond you, right? That’s what I thought, until I saw a professional instructor at work.

Earlier this year I arranged for a friend of mine, Jennifer Forte, who had never fired any type of firearm in her life, to get a few hours of coaching. I signed her up for a lesson with Skip Smith, the chief instructor at the Orvis Sandanona shooting grounds in upstate New York (845-677-9701). I tagged along to pick up a few pointers for my own less-than-perfect form and to watch her initiation into the shooting sports. I’m glad I did.

As with all types of firearms instruction, our day began with a review of gun safety. But while I might have been content to review these basics and move quickly to the firing line, Skip took the time to cover some extra ground. He showed Jennifer an empty shotgun shell, explained how it worked and made the point that of the hundreds of pellets that a shell holds, all it takes is for three of them to connect with the clay in order to break it. “There’s no reason to ever miss,” Skip noted.

He also told Jennifer not to worry about lead or any of the mechanics of shotgunning. “You have to trust your natural instincts,” he said. “Your hand and eyes will know what to do. You don’t miss your mouth when you eat and your eyes tell you where to steer your car.” Before Jennifer had even shouldered a shotgun, Skip was building her confidence and removing any potential mental blocks.

After this we checked her eye dominance. Though Jennifer is right-handed, her left eye is dominant. To lessen the problem, Skip helped her mount a shotgun on her right shoulder, had her look down the rib and then applied a bit of Scotch tape to the left lens of her shooting glasses while the gun was mounted. This last bit is critical. With your cheek against the stock, your eyes look out the top portion of your lens when sighting down the gun. If you apply the tape to obscure your vision as you would when standing upright, the tape will be in the center of the lens and in the wrong place. The other way to deal with this cross-eyed dominance is to have the shooter mount the gun on the same side as his or her dominant eye. That’s what I did years ago. Even though mounting the shotgun on my right side was awkward at first—especially since I had been shooting rifles left-handed for years—after a week or so of practice with an empty gun it felt natural.

ON THE FIRING LINE

Skip equipped Jennifer with one of the school’s 28-gauge over/unders. Probably one of the worst mistakes is to give a new shooter, especially a woman or a youngster, anything other than a soft-kicking shotgun. Even a 20-gauge shooting target loads, especially an over/under, starts to hurt after a box of shells, and that will dampen a new shooter’s enthusiasm faster than just about anything.

A semi-auto, with its reduced felt-recoil, can be a real boon for first-time instruction. But before she ever pulled the trigger, Skip took Jennifer to the first station and had her track the target’s path with her finger. After doing this a couple of times, he asked her to say “bang” at the point where she thought she would like to break the target with the shotgun. Every time she followed the target’s flight with her index finger (an easy straight-on incomer) and said “bang,” Skip beamed and told her she’d hit it. He then had her do the same exercise with the empty gun. Again, Skip told her she’d broken all the targets. Then came the real test with a loaded gun. With the shotgun pre-mounted, Jennifer solidly hit her first clay bird.

It was a bad day to be a clay target. Jennifer proceeded to dust her second, third and fourth birds. After six straight she tackled her first report pair and broke both. For her 10th target, Skip switched to a bird heading straight away. She hit it and the next three before missing for the first time. After a quick correction she went back to creaming them.

“You’ve just mastered two-thirds of shotgunning,” Skip informed her. “Targets either come toward you, head away or cross from side to side—or do some combination of the three.”

Skip showed Jennifer some incomers with a slight crossing motion by having her stand about 30 feet to the side of the first station we had shot. Without even having to explain it to her, she started to build in lead. By adding to her skills in small increments, Skip was creating a solid foundation for her shooting future.

There were several keys to Skip’s success with Jennifer that morning. He continually built her confidence, used uncomplicated targets and made the process of hitting clays look and sound simple. Jennifer shot a light-kicking 28-gauge gun and we took frequent breaks. At one point Jennifer’s right shoulder began to feel tender, so we took a stroll back to the pro shop and bought her a shooting pad designed for women. (It attaches directly to a bra strap.)

So are you ready to start teaching new shooters yet? If you’re patient, start slowly and make sure everyone is having a good time—then yes, teach away. But if there is someone in your life—a spouse, a child or just a dear friend—whom you really, really want to take up the sport of shotgunning, do that person a huge favor and pay for some instruction. Is it expensive? From my perspective, the $200 to $400 for a morning’s worth of coaching costs is money well spent.

The instructor, Skip Smith, determined Jennifer’s dominant eye by having her focus on his face from about 20 feet away and look at it through a small opening in her hands as shown. The eye the shooter naturally uses to look through the opening is the dominant eye.

Skip then made sure the shotgun Jennifer would be using fit well and explained how to grip and mount the gun.

Before she shot, Skip demonstrated with a clay how the target would appear as she swung and followed the bird.

Again, before a single shot was fired, Skip had Jennifer trace the path of a live target with her finger and say “bang” at the point she wanted to break it.

Once Jennifer started breaking actual targets, Skip made sure she maintained a forward, aggressive posture at the shooting line.

Trick Them Into Shooting

Are you trying to woo your sister’s very available, very cute, yet very vegetarian best friend? Are you trying to convert your wife so that you’ll have a partner afield and, more important, carte blanche when it comes time to buy a duck boat?

What you need to do is to offer some pampering with those first gun lessons. The Equinox Inn in Manchester, Vt., is a full-fledged spa where skin treatments, massages and gourmet food go hand-in-hand with shotgun shooting. Working with partners Orvis and Country Pursuits, the Equinox can arrange a package that includes lessons in shooting, off-road driving, archery and falconry. The mix of activities is sure to win her heart and will quite possibly get you a shooting partner in the process.