A new highway bill is rife with money and programs that will benefit the outdoors; plus, a victory for the gun industry 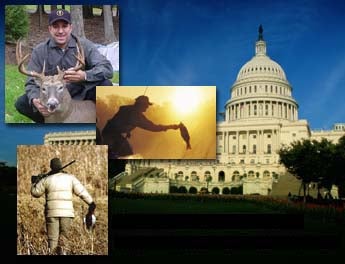 With a month-long break looming at the five o’clock whistle, Congress decided last Friday to get some work done. At the top of their list was the mammoth highway bill. After weeks of debates, rewrites and compromises, it passed both the House and the Senate. From this unlikely legislation, hunters and anglers stand to benefit substantially through programs and direct funds.

Typically the bill is limited to improving infrastructure for automobiles. Of course it also includes the occasional pork project such as Boston’s big dig. However, this year, groups like the Congressional Sportsmen’s Foundation saw a chance to take a piece of the pie for conservation efforts.

And rightly so, considering new road construction can drastically affect watersheds, wildlife habitat and land access. This year’s bill is laden with ways in which growth and conservation can be balanced.

Most notably is the “capture” of the remaining 4.8 cents of the 18.3 cents-per-gallon tax on motorboat fuel. This money will be routed to the Aquatic Resources Trust Fund. Prior to the vote, the monies were diverted to other projects not necessarily correlated to fishing and boating.

“These funds paid by anglers and boaters will now be dedicated to sport fish restoration, angler and boating access, and boating safety programs across the United States,” said Gordon Robertson, Vice President of the American Sportfishing Association.

In a $286.5 billion bill, a nickel might seem inconsequential, but multiply it by 2.2 billion gallons of gas used annually by boaters and suddenly $110 million is available. “We will gladly put that nickel back into our pockets,” Jeff Crane, President of the Congressional Sportsmen’s Foundation said.

The Aquatic Resources Trust Fund delegates funds for boating safety, fisheries conservation and boating access. Money is also used to protect coastal wetlands. These are major issues on the nation’s coastlines as development surges among both oceanfront cities and second homes.

Several other measures were included for land-based conservation as well. $74 million annually has been marked for the Recreational Trails Program. The funds will help to maintain and develop thousands of miles of trails for hunters and fishermen.

Roads in wilderness refuges will get more attention. The dollar amount increased $9 million to $29 million each year. Bridges and culverts will be better maintained, too, in public forests. This should ensure better fish passage and water flow in critical rivers.

Deer collisions are a growing safety concern. Over $1billion in auto damages were estimated last year. Congress addressed the issue by authorizing “significant” funds to attempt to reduce animal-related accidents. This is good news according to Terry Riley, Vice President of Policy at the Theodore Roosevelt Conservation Partnership. “In some [BRACKET “places”] more animals are killed by drivers than by hunters. And current highway projects include plantings that actually attract deer to the roads,” he said. As if on cue, Congress also earmarked dollars to combat invasive plants along the national highway system.

[pagebreak] When all the checks have been written, sportsmen can expect to see roughly $1.5 billion over the next six years according to Melinda Gable, CSF’s Chief Operating Officer.

The significance of this bill goes beyond the huge payout. It demonstrates the importance of unity among conservation organizations and also the need to think creatively. Pulling money from an infrastructure bill is a new idea, but one that will be reused in the future. Along with highway bill, the sportsmen’s community tried to look at ways to direct some of the potential revenue streams from the Energy bill back into conservation, but it didn’t happen, Jeff Crane said.

The Congressional Sportsmen’s Foundation and others should be commended for their efforts. Their break will be short, though. This falll, discussions begin on the next farm bill, which includes CRP funding.

Why stop with conservation? Congress continued its prolific voting last week with gun liability reform. The legislation relieves gun manufacturers of accountability if a legal product was used in an illegal act, the same way a kitchen supply company is not liable if a knife is used in a murder.

The bill was introduced last year, but fell short of a vote when several anti-gun amendments began to weight it down. With a stronger majority this session, Republicans were able to bring a clean bill to the floor.

The Senate vote (65-31, 4 abstentions) had a couple of surprises. Evan Bayh (D-IN), from gun-friendly Indiana voted against. He has been mentioned as a potential presidential contender, but votes like this will be hard to reconcile with the pro-gun crowd. Meanwhile, Minority Leader Harry Reid (D-NV) voted in favor.