Hunting and fishing destinations for the discriminating sportsmen. 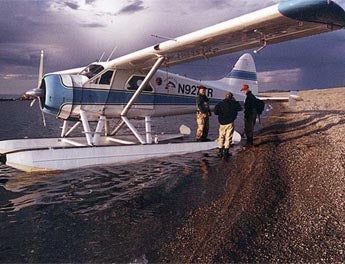 Delta Ducks Though his beloved Beaver Dam Lake hasn’t changed much, Nash Buckingham would hardly recognize Tunica County, Miss., today. The Memphis writer, whose books established the Mississippi Delta as a wonderland for waterfowl and upland bird hunters, might be surprised to see that the vast cotton fields of his youth have been replaced in some places by casinos and high-rise hotels.

Modern sojourners who like to hunt and fish without forsaking all the niceties of civilization will appreciate the difference. On a recent trip to northern Mississippi, I spent one evening in the Grand Casino Tunica Resort’s Murano’s Restaurant feasting on the best steak dinner I’ve ever eaten, and the next morning I enjoyed the finest duck hunt I’ve ever experienced. That afternoon, I went on a mule-wagon quail hunt to rival any staged in Georgia plantation country.

The state legalized casino gambling in 1990. Since then, northern Mississippi has been transformed into a gambler’s mecca, but without sacrificing the Delta’s hunting and fishing opportunities that Buckingham helped make famous.

“De Shootinest Gent’man” would have enjoyed sharing a Beaver Dam blind with Mike Boyd and his son Lamar as much as I did. Mike’s Lab Molly had a busy morning retrieving mallards, gadwalls and wigeon from the waters of the seven-mile-long cypress-studded slough.

The quail hunt took place at Fitch Farms near Holly Springs, about an hour’s drive from Tunica. There, visiting hunters can choose between walking over the rolling hills behind dogs and handlers or riding from point to point on an old-fashioned Southern quail hunt, complete with a dog wagon pulled by a team of mules.

Available Species: **Various types of puddle ducks, snow geese, deer, turkeys and bobwhite quail.
**Best Months: Late November through January for waterfowl, through February for quail; fall for deer hunting; spring for wild turkeys.
Access: **Less than an hour from Memphis International.
**Cost: A morning duck hunt with Beaver Dam Hunting Services costs $200 per gun, or a minimum of $600. Quail hunts at Fitch Farms range from $600 per person for a half-day hunt to $975 per person for a full-day hunt, including overnight accommodations. Rooms at the two hotels of the Grand Casino’s Tunica Resort start at $69.
Other Amenities: Sporting clays and skeet facilities, gambling casinos nearby, Tunica Riverpark, situated on the Mississippi River near the resort.
Contact: Beaver Dam Hunting Services, 662-363-6288; Fitch Farms, 662-252-8855, FitchFarms.com.
-Colin Moore

**Alaska Fishing **
It’s a rare Alaska destination that offers the best of saltwater and freshwater fishing in one package. Justin and Ponch Marchbanks of Glacier Bay Country Inn offer first-class saltwater fishing aboard a comfortable boat in the protected bays of Icy Strait. Travel time to hot spots is less than 40 minutes, and seasickness is unheard of here. Best of all, I didn’t see another angler on daily fly-outs via bush plane to remote streams and lakes filled with husky trout, salmon and char.

I saw bears fish and whales breach as I caught fish after fish. Remote cabins with plush interiors and four-course meals await you at the main lodge. Guests kick back on their cabin’s front porch and watch moose and bears in a nearby meadow. At trip’s end, I wondered how I had missed this place in 30 years of travel throughout Alaska, but I was glad it found me.

First-Class Varmints
For an offbeat hunting adventure, it’s difficult to top a luxury varmint shoot. You simply don’t hear “high class” and “ground squirrels” uttered in the same sentence very often. But the people who run Paws Up Resort in southwestern Montana may change all that with a spring varmint shoot that includes enough trimmings to satisfy even the most finicky member of the spa set.

Granted, it felt a little odd at first to have hot tubs, a 4,500-square-foot “cabin,” gourmet food and a superbly stocked wine cellar at our disposal after expending hundreds of rounds of .17 Mach 2 and .204 Ruger, but the folks in my hunting party got used to it fast.

Paws Up is located in the heart of the Blackfoot Valley, some of the most stunning country in the Lower 48. The ranch itself covers about 37,000 acres and has several miles of the Big Blackfoot River flowing through it.

Paws Up conducts fall elk hunts on horseback in the nearby Bob Marshall Wilderness as well as flyfishing trips on regional rivers. If you want to experience a rifle elk hunt during the bugling season, this is one of your best bets.