Twenty-one days in the tracks of a record-book bull. 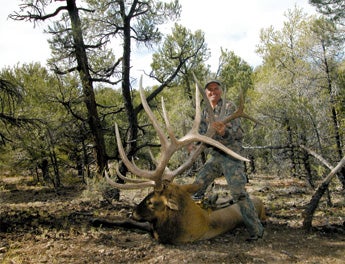 Nevada’s Steptoe Valley lies between the foothills of the Egan’s and Schell Creek ranges. The landscape is scattered with piÃƒÂ±on and lodgepole pine, juniper, sage valleys and aspen groves. It’s the type of vertical landscape we think of when elk come to mind. Randy Ulmer stepped into this picturesque panorama to search for his dream: a world-class bull.

Nevada’s landscape might be challenging, but so is drawing a nonresident tag. Once you draw one, you can’t reapply for five seasons. If you harvest a bull, you’re ineligible to apply for the next decade. With this in mind, Ulmer set aside three weeks for his hunt.

Arriving from his home in Arizona days before the opener, Ulmer and his friend Greg Krogh used the time to scout. Late one afternoon, Krogh climbed a limestone ridge and glimpsed what looked to be a huge loner feeding below. After telling Ulmer about the bull and where he might find it, Krogh left to attend to other commitments.

A Lonely Quest
“Loneliness is a part of bowhunting-perhaps the part I enjoy most,” says Ulmer, a famed 3-D archer who has won every major competition title. He spent two weeks looking, but located only average bulls. He wanted a giant.

With time running out, Ulmer opted to look for Krogh’s bull. “It was a gamble-it was more than two weeks since that bull had been glassed-but it was all I had left,” says Ulmer.

The following morning, he slipped into the area where he suspected the bull might be and lay on the ground. He looked up at the stars as he listened to bugling in the distance. Weeks in the wild had sharpened his senses and desire; this was what he’d come for.

Ulmer feels that some old bulls don’t keep harems, because they don’t have the energy to defend a herd. Instead they simply go from herd to herd after dark searching for cows. The morning’s distant bugling supported his theory. He listened to a lone bull with a fierce bugle going from one herd to another in the darkness.

[pagebreak] The Chase Is On
Shortly before daybreak, Ulmer heard the bull separate from another herd. It headed south while other elk went north. “Like most dominant bulls, he bugled infrequently. It took everything I could muster to follow him and not the other bugling bulls,” says Ulmer.

After hours of cat-and-mouse pursuit, Ulmer caught a glimpse of the huge bull as it crossed a swale 200 yards away. He planned to stay within striking distance, but he didn’t want to get so close that he’d bump the bull. “During the course of the morning, I passed him twice, only to hear him behind me,” says Ulmer. “It was unnerving.”

After following the bull for several hours, Ulmer heard it about 100 yards ahead. “I recognized his moan; he was about to bed down.”

Weary from nearly three weeks afoot, Ulmer stalked through matted brush toward where he thought he’d heard the bull. He was part of the wild now. He was creeping forward like a true predator.

“Suddenly, he was there,” recalls Ulmer. “He was very close, his antlers swaying as he fed. He was so close I could hear him chewing.”

Ulmer froze and attempted to gather his composure. The bull stepped into an opening. Ulmer settled his sight pin on the giant’s vitals, drew a breath, let out half and squeezed his release’s trigger. The bull crashed ahead. Then the sound faded as gravity overcame the giant. There was silence.

“I collapsed, looking up through the piÃƒÂ±ons into a vivid blue sky, and muttered, ‘I did it,'” Ulmer recalls.

A shiver ran uncontrollably through the hunter even though the crispness of morning had passed. Kneeling beside the monarch, he thought of how majestic it was. “His beams were as thick as my arms from the bases to the rut-blunted tips,” says Ulmer.

The elk scored 4097/8 inches non- typical, making it the third largest elk ever harvested in the staate and the new Nevada bowhunting record.