A quest for the four major U.S. turkey subspecies. 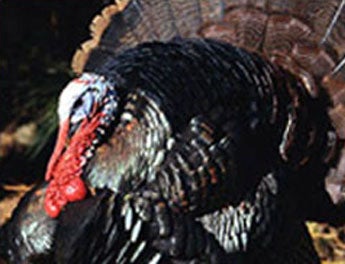 Forty years ago, when I lived in the East, I had to drive 150 miles to find a turkey to hunt. Times have changed. Today, birds are everywhere, pursued by an army of hunters. While most hunters are content to outwit a spring gobbler by hunting close to home, some people have the notion to try for each of the four prominent subspecies in the United States over the course of a few months. That feat is understandably called a grand slam.

I was one of those deranged individuals, and I set out to collect all four last spring. As one who hunts more than a little, I often challenge myself by setting certain goals. This turkey thing was my latest mission.

Eastern
The Eastern subspecies is the most numerous in North America and is found all over the East as well as in the Midwest and even in some Western states.

The hunt: I hunted this bird at the annual Alabama Governor’s Hunt. I was paired with Joe Drake, a Georgia fireman who is one of the top callers in the country. I’d hunted with Joe before and was confident about taking a bird.

Interestingly, Alabama had just legalized the use of decoys. Prior to my hunt, it was the only state left in which decoys were illegal. We took advantage of the change and set out a jake and hen decoy in a field where we’d heard a gobbler close by. After settling into a makeshift ground blind, Joe began calling with soft hen yelps. It wasn’t long before a tom answered, and within 10 minutes a jake walked into the field from the opposite side, followed by a gobbler with the longest beard I’d ever seen. The two birds headed straight for the decoys. I waited until the two toms had some distance between them and fired a shot. It was almost too easy. Bird number one of the slam was down. His thick, full beard was a shade over 11 inches long.

Lesson learned: Decoys will often cause birds to lose caution and walk into range. More than once I’ve had birds refuse to come in because they couldn’t see the “turkey” that was making the call.

**Osceola **
Florida was next on my list, where I’d hunt Osceola turkeys with outfitter Ron Mayes and my pal Mark Schindel of Gerber Knives. Our plan was to sit in a tent blind near the birds’ travel routes.

The hunt: When we arrived, Ron said the toms were badly henned up and calling was ineffective. The blind sounded like a workable plan, but sitting in that tent in the Florida heat was pure agony. I sat there for two days, frustrated by the sight of four longbeards that paraded around with plenty of hens but refused to come to the call. I moved the sauna to several locations but always got it wrong. Finally, on the third day, I had a hen feeding right in front of me. Perfect decoy, I said to myself. If only those gobblers would happen by, she might sucker them into approaching. Which is precisely what happened. I picked out a bird and had turkey number two.

Lesson learned: Although I was tempted to pull up stakes and hunt on another ranch of Ron’s, persistence was the winner in the end. Would decoys have worked here? Possibly.

[pagebreak] Rio Grande
The Rio Grande subspecies is typical of the Texas and Oklahoma region but is well represented throughout the West. I hunted the King ranch in southern Texas with Linda Powell of Remington Arms, who had a new shotgun to field-test.

The hunt: We set up on a trio of gobblers we’d seen walking in the distance. As we hunkered in the brush several hundred yards in front of the birds, guide Oscar Cortez began calling. It was right out of the book: The birds sashayed in nicely. They were easily within range, but I could see only body parts. Linda was sitting a few yards away, so I whispered for her to shoot if she had a clear shot. She did, and she shot. What happened next was remarkable. The other two toms initially flew up, but they quickly settled down. I whispered to Oscaar to keep calling, and the toms walked over to the dead bird and pounced on it. I had a clear shot and collected bird number three.

Lesson learned: That wasn’t the first time I was teamed with a companion and took two birds. If one of you shoots a bird, stay put and keep calling. A gunshot might not spook other nearby birds at all, allowing for a double.

**Merriam’s **
With three of the four birds nicely recorded in my journal, I headed for my home state of Wyoming for the last tom, a Merriam’s. I normally hunt the Black Hills National Forest and have come to know the area well over the years. I figured the hunt was a lead-pipe cinch, but Murphy’s Law intervened. Gale-force winds and driving snow plagued the entire hunt.

The hunt: At one point I had three jakes within easy range but opted to pass, hoping to take all longbeards in my quest for a slam. As it turned out, those were the only toms I got close to, and I drove home with just memories.

Lesson learned: If the going gets tough, shoot a jake. I’ve done so plenty of times in the past. They’re great fare on the table, though a couple of pounds lighter than a mature tom. If I try this slam-in-one-year stunt again, jakes had better beware.

Hunt of the Month: Spring Bear
Top spot: **Wyoming’s Bighorn Mountains.
**Skinny: **This is one of the few spring hunts in the U.S. where you can use bait. The area also has a good population of “color phase” black bears with cinnamon, chocolate and blonde fur.
Baits must be registered with the Game and Fish Department’s regional Sheridan office. Glassing any of the numerous meadows at last light is also an effective technique.
**Season/Fee: May 15-June 15 in Units 1-5, May 1-June 15 in Unit 6. Season may close earlier if quota is met. Call the bear hotline at 800-264-1280 for hunt status. Resident license costs $37; nonresident license is $301. Hunters also need a $10.50 conservation stamp.