Check and see how you rate. 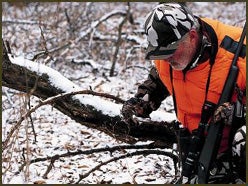 1)The answer is B.
The odds favor it being a buck since bucks tend to be more solitary in their choice of bedding locations than does. Does and fawns, on the other hand, tend to bed in a family group. Generally, when you find a doe bedding area you’ll find several beds in fairly close proximity.

**2)The answer is False. **
Widely splayed tracks are made by does and bucks that are running or walking quickly. If a doe is running or walking fast she will leave splayed tracks just like a buck’s. Only walking tracks can be trusted as an indication of size. Consider the stride length between tracks to differentiate between walking and running tracks. Another indicator: The tracks of a running deer often are exaggerated in size because the animal’s hoofs tend to skid slightly forward as they knife into the dirt.

3)The answer is B.
Given that the rub was made on the side of the tree away from the feeding area, it is very likely that the buck approached the tree while walking toward the feeding area. This suggests it was most likely made in the evening. If the rub were not on a trail it would be much more difficult to determine timing.

4)The answer is D.
During the peak of the rut bucks are too preoccupied to check scrapes regularly unless they happen to be along the buck’s course of travel as he searches for does. You’re better off hunting other locations (places where does concentrate or travel) and forgetting about scrapes. Scrape size is no indication of the size of the buck that made it. Scrapes are made along field edges are most often made at night and could be investigated by bucks of any size and year class.

5)The answer is A.
Never try to read too much into individual rubs. The tree is fairly large, but even young bucks will rub trees of this size. Biologists R. Larry Marchinton and Karl Miller, of the University of Georgia, studied rubs for several years with the conclusion that a rubbed tree must be at least six inches in diameter before you can assume, with reasonable confidence, that the rub was made by a fully mature buck. And remember, just because a buck is mature doesn’t mean it has big antlers.

SCORING: If you answered only one or two questions right, maybe you should stick to squirrel hunting. If three of your answers were on the mark, there’s hope. Four correct answers means your name might make it into the Boone and Crockett or Pope and Young record book one of these days. If you got all five answers right, you might even get your own record book named after you.