This Canadian island is one of deer hunting's best values. 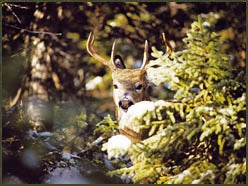 Imagine an island loaded with deer, with a limit of two either-sex animals, where the hunter success rate is often 80 percent or better. You’ll be looking at Anticosti, an island in the Gulf of St. Lawrence that measures some 125 miles in length and about 30 miles on average in width. And get this-it supports more than 100,000 whitetails.

It wasn’t always that way. In 1895, French chocolate maker Henri Menier purchased the island with visions of turning it into a wildlife paradise.

Menier was an ardent hunter. When he learned that the island had no deer and just a few mammals, he imported several species, including 125 deer. Some species flourished, others perished. Whitetails took to the island instantly and quickly occupied the entire landscape. Besides whitetails, a modest moose herd inhabits the island, while the few black bears that were once occasionally observed seem to have disappeared. There are no wolves, and foxes are the only predators. Consequently, whitetails flourish and their numbers must be trimmed by hunters, though severe winters can temporarily decrease the herd size. That’s some of the good news, but there’s more. The cost to hunt the island is amazingly low, a fact that lures many Americans to Anticosti each year.

Anticosti is part of Quebec, and Canada requires American hunters to be guided or to hunt in a guide’s specific territory, depending on the province. Five outfitters operate on the island, each in his own specific location. Most of the island is hunted, though some park areas are off-limits. I’ve hunted Anticosti twice, both times with Sepaq Anticosti (800-463-0863), a government-owned company and by far the largest outfitter on the island; it accommodates about 3,500 hunters annually. The other outfitters combined have about 2,500 clients. My first hunt was with Vin Sparano, former editor-in-chief of Outdoor Life. My intentions were to use a guide for the first buck and to hunt on my own for the second, but it didn’t work out that way. When I first set foot in the woods with my guide, Alain Marchand, I immediately realized that this man of French ancestry who spoke broken English was one of the most skilled whitetail hunters I’d ever met.

I never figured I knew everything there was to know about hunting whitetails, or even most of it for that matter, so when I have an opportunity to head afield with a real woodsman I jump at the chance.

Alain was an expert at rattling whitetails, and on a very windy day he leaned a stout branch against a tree. He broke it smartly by stepping on it, and the branch snapped with a loud cracking sound. Then Alain settled down and began to rattle. I was most curious as to what he was doing and wasn’t very attentive because of the high wind. I figured no buck could possibly show.

Suddenly Alain pointed into the woods. I looked to see a nice buck running full bore at us. This deer was wasting no time, jumping deadfalls and twisting through brush. I shot him at 20 yards, an eight-pointer that was representative of Anticosti’s higher-end bucks.

Stunned, I asked Alain why he broke the branch.

“Buck sleep,” he said. “No hear antlers in the wind. I wake buck up. He get alert and hear antlers.”

The next day Alain rattled in another eight-point buck, and I was again able to take the deer at close range. Vin was successful, too; he took two bucks with guide Gilles Dumerescq, another talented hunter who is also the director of marketing for Sepaq Anticosti.

Though I’ve never considered food and accommodations essential to a quality hunt, I can’t remember a camp having finer food or more comfortable lodging. To me, a hunt in a cold, wet pup tent is perfectly fine if there are reasonable expectations for seeing the quarry, so anything extra is a bonus. Nothing was spared by Sepaq Anticosti when it came camp comfort.

I made my second trip thhis past fall and found that very little had changed, though a severe winter the year before reduced the whitetail population to the point where hunter success wasn’t as high as normal. Nevertheless, I saw seven bucks, though I’ll admit a black cloud hovered over my head every day. It was Murphy’s Law at its best-I was treated frequently to the sight of waving tails bouncing through the brush but no venison to bring home.

I did pass on a buck or two, but the big ones indeed got away.

You can hunt one of two ways: by yourself or with a guide. If you opt to hunt on your own, you’ll either be dropped off at a trail at dawn and picked up at the other end in late afternoon, or walk a trail to a dead end and return to where you started. Hunting on your own is safe. The trails are very well marked; there’s no danger of getting lost unless you strike off through the woods and lose your bearings.

The coastline attracts deer later in the fall as they seek seaweed when snow covers the woodland browse. This is a unique hunt, and one that is offered during the final days of the season. But don’t be surprised if you find it a bit difficult to concentrate on hunting near the rugged beaches. This is a land of unspoiled beauty, a charmingly remote area where you won’t see another hunter all day.

Most of the island is evergreen forest; in some areas it’s very thick. Still-hunting is the common strategy, though there are tree stands in some areas. Typically a guide will place you in an area that’s been scouted and has fresh sign.

Anticosti is the perfect destination if you’re looking for solitude and a place to hunt on your own. And for whatever reason, the deer here offer some of the finest-quality venison I’ve tasted. That’s plenty of reason to give this unique place a try.